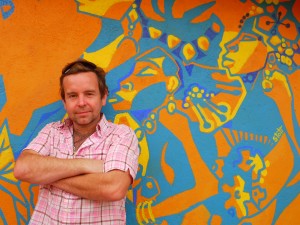 Director Toby Gough’s global cachet is considerable; he has brought Cuban musical productions to Edinburgh Fringe, where his work “Children of the Sea”—theater projects and music workshops for victims of the tsunami in Sri Lanka, Thailand and Indonesia—won the festival’s first prize. Gough has produced “Julius Caesar” in Africa and is currently running a show about Brazilian music. But “The Merchants of Bollywood,” billed as the first authentic Indian music and dance spectacular out of Bombay for the stage, which opens at the Auditorium Theatre this week, is the first time Gough has adapted from a filmic tradition.

We corresponded with Gough over email from Singapore the week before the show opens.

You’ve done a number of theatrical productions involving cultures from all over the world, but none seem to have used as specific a generic performance tradition as Bollywood. Did you stay close to Bollywood conventions for this piece? The plot seems to be fairly faithful to Bollywood stories.

Yes, the idea was to take a real life story and put it through the Bollywood mega mixer….

It’s an impossible fantasy, a perfect dream. The experience for the audience is to see a Bollywood film plot unfold before their eyes, in front of the camera, and then we show all the real-life chaos of what making movies in Bollywood is really like. The tiny budgets, the the impossible schedules, the formulaic scripts, the shoots in mountains, the tantrums of the divas and the relentless plagiarizing of Hollywood films to fulfill the demand of the billions of Indians who love what is known as Bollywood Masala!

Along the same lines, can you talk about process and issues involving turning a highly cinematic form into a theatrical form? Did anything get lost? Were there any surprising discoveries?

Yes, we had a series of problems in our bid to tell the story of the Bollywood film industry with a hundred-percent authenticity.We wanted to work with the top creatives from Bollywood, so to first of all get through the barrage of security to speak to the Bollywood superstars was a challenge. In India these people are treated as semi-deities. To then convince them of our plans to make a musical was another. Then to assemble a cast and company who were willing to leave Bollywood, and Film City, and take them away from the mecca for movies, was a huge ask for people who have chosen to be in films. There is no real show agency in Bollywood and parts are obtained by networking as socializing and making sure producers know your face. To leave Mumbai to go on tour around the world takes you off the casting map. Then once we had a cast, trying to get them to remember the dance moves for two hours, and a script for a show, when you can’t reshoot, or call ‘cut,’ meant a whole new discipline of learning. 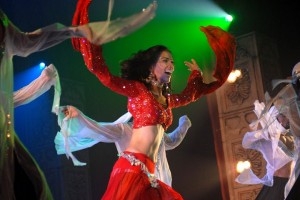 What do you think of the place of theater in global culture?

I think that theater has a great role to play in helping cultures understand one another, and respect the richness and fascinating stories of other lands. I love seeing the many different people, from different faiths and backgrounds, who sit in the “Merchants of Bollywood,” responding to the comedy and the drama and the emotional story together, and all getting up at the end and dancing together in the aisles. A local story that has universal themes is a powerful reminder of our shared humanity.

I just have to ask this question given your wide background in global theater. This is again very broad, but how do you see theater’s place in the new world order? Or—how do your productions work with and speak to this kind of emerging transnational art scene?

If you are asking about creating productions to tour internationally, one has to tell stories without relying on language, through choreography, music and staging. With regards to the prominence of India and China as economic super-powers, this creates new territories for us to tour shows, and inevitably one has to consider these cultures when one is creating the show. I imagine taking my Cuban music and dance show called “The Bar at Buena Vista” will not go down too well in countries where alcohol and short skirts are banned. However “The Merchants of Bollywood” has proved that the ingredients of music, dance, big-brush-stroke storytelling, slapstick comedy and impossibly colorful costumes, speak to all people, of all ages around the world.