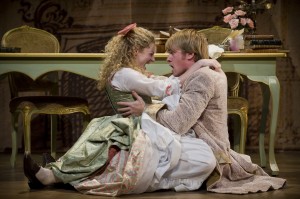 Much musical theater plays to the most maudlin of impulses, shamelessly tugging at the heart. But put Mary Zimmerman, Voltaire and Leonard Bernstein in a room, and you expect something more cerebral. And indeed, “Candide” is.

Voltaire wrote his romantic-tragicomic novella as an enlightened rebuttal to the “philosophy of optimism” holding sway in his time. It’s a philosophy brought to life here in the character of the philosopher Pangloss, and his true believer Candide, who suffer monstrously and yet remain true to the idea that it’s all for a higher purpose. It’s not much of a stretch to find contemporary resonance in political conservatism and religious fundamentalism (and their Tea Party bastard child), both notions rooted in preserving the status quo, and Zimmerman even inserts a line about “intelligent design” early on, just to make sure we get the message.

The story of “Candide” is narrative excess in service of a point: the young optimistic is pushed from his life of comfort for daring woo Cunegonde, whose noble lineage is out of his class; from there a life of horrifying misadventures unfurls, depicted to comic extremes, as he works his way around the world and back.

The nonstop change of venues must be quite the production-design challenge. Set designer Daniel Ostling solves it by punting, in effect, with a relatively unchanging open wood-paneled box, with multiple doors and windows, that can serve as the chamber of aristocracy or the walls of a gritty city’s buildings. Almost claustrophobic, it manages to take us around the world. Though not that unusual for Zimmerman, it’s set minimalism for the Goodman. (And so too props, which are often comic little bits of plastic, like soldiers, toy boats and flowers.)

Likewise, Voltaire’s “Candide” is astonishingly economical in what it accomplishes with such brevity, but he does it without music. The 77-page novella clocks in here in just under three hours, which move along apace, except perhaps for a longer bit of song-less exposition in the second act. From what I could tell, the audience didn’t seem to mind,  buzzing with pleasant surprise over the work’s humor and accessibility in the lobby afterward. 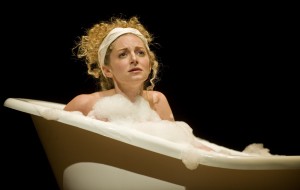 For all Zimmerman’s stagecraft, though, the music is most memorable for me. The twelve-piece orchestra, helmed by music director Doug Peck,  sounds magnificent, especially in Bernstein’s brilliant “Overture,” marred only by the theater patrons who don’t seem to get that this is not chitchat time, even ignoring the lights-out cue. Geoff Packard plays Candide with due naive charm, though his singing voice is not especially noteworthy. Lauren Molina’s Cunegonde has a gorgeous vocal instrument and she gets to show it off with the operatic “Glitter and Be Gay.” (Note with extreme irony that both are veterans of “Rock of Ages” on Broadway, a show that willfully insults the intellect as much as “Candide” courts it.) Though dancing is not a cornerstone of this work, Daniel Pelzig’s choreography helps keep things moving, and the rest of the cast is loaded with able vets of notable skill, especially Larry Yando as Pangloss, Hollis Resnik as Old Lady, and  Jonathan Weir as Governor. When philosophy gives way to expediency at last, the ensemble soars in crowd-pleasing harmony with “Make Our Garden Grow.” The heart wins out after all. Or does it?

The musical “Candide” has always been more critically acclaimed than commercially successful, and in spite of my admiration for Zimmerman’s hilarious book, more faithful to Voltaire than most, I can sense why. Since all is contrived in service of a point, the narrative (as well as the lyrics, the artful creation of poet Richard Wilbur and an imposing team of contributors like Stephen Sondheim, Lillian Hellman and Dorothy Parker!) seems to tread the line between full-blown satire and pre-gothic fiction of a more serious order. The love that drives Candide seems wholly artificial, as contrived of a sense of duty as the Baron’s clinging to his sister’s bloodline superiority, even after a lifetime of rape, whoredom and working-class misery. In failing to land decisively in one camp or the other, the whole thing leaves me a bit unsettled. But this is more query than caution; this is a show to see. (Brian Hieggelke)