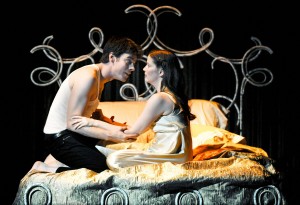 With artistic director Barbara Gaines busy directing “Macbeth” over at Lyric Opera, Chicago Shakespeare Theater brought in renowned Shakespearean director Gale Edwards from Australia (veteran of several Royal Shakespeare Company gigs) to helm its season premiere of “Romeo and Juliet.” She, in turn, imported many of her leads from out of town, but no matter: this is an exceptional production regardless of its principals’ pedigrees. Most striking, perhaps, is the design of the show, and for that we have Chicagoans to thank: Brian Sidney Bembridge’s set is astonishing, the back stage opened up to create a long, deep hangar-like space, which functions as Verona streetscape, interior of the Capulet mansion and all other locations in the play. It is neither modern nor classical as befitting the production’s overall design, including Ana Kuzmanic’s wardrobe, which seems to master that balancing act of being of no time and all time at once. Like the story itself.

With Shakespeare’s brilliant language of love and the tragic romance at its core, it’s easy to forget that “Romeo and Juliet” is not a love story but a tragedy, and that tragedy extends in Edwards’ vision to all those on stage whose youth is so needlessly misappropriated by adults. Edwards thankfully lets the Bard’s text work its wonders; her staging brings its base, more visceral elements to fullest life in establishing the personas of its young frolickers. The passion between Romeo and Juliet, so quick to strike and so intense in its short duration, here seems as much charged with the hormonal adrenaline of capricious youth as true love, making the tragedy even more so, given that youth. Joy Farmer-Clary’s effervescent Juliet really seems but a fortnight short of 14, and Jeff Lillico plays Romeo convincingly as a soul-searching adolescent. In Edwards’ hands, “Romeo and Juliet” has much to say about the folly of war to its American audience, when parents send their children to die for their conflicts, often for conflicts whose origins are forgotten, confused or disbelieved.

The stars of this story are Romeo’s cohorts, young men—boys—who play with swords, who taunt and tease and flirt in the most bawdy manner. These are boys consumed with love, or confused with lust. They are boys on the doorstep of adulthood. None more so than Ariel Shafir as the ill-fated Mercutio, who fills the cavernous space with charisma whenever he’s on stage. These are the children who must die at the hand of their parents’ foolish conflicts. Needless to say, it’s tragically relevant today. (Brian Hieggelke)