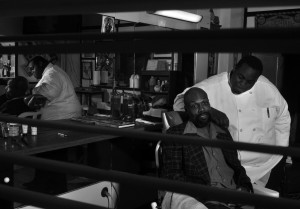 Set in a Garfield Park barbershop amidst the now-infamous riot of 1966, Terry Abrahamson’s “Doo Lister’s Blues”—originally produced as a workshop at the DuSable Museum of African American History in 1999—is Chicago-centric theater that tackles national themes of race, free speech and governmental oppression. Abrahamson, a Grammy winner with numerous impressive credits to his name, posits here that music can elicit social change. As the titular Doo—a barber-cum-songwriter—Warren Levon (an actor reminiscent of rapper Cee-Lo Green both vocally and physically) sits in his shop with his friend Catfish (Kenneth Johnson) and pens saccharine doo-wop odes in his spare time. After a personal tragedy (which director Victor Cole stages expertly) and much urging from a Jewish hippie (Victoria Abram-Copenhaver), Doo changes his tune (and tunes) and sets about writing socially relevant lyrics. This quickly lands him and those around him in hot water with Uncle Sam. As with good song lyrics, the message is clear without being ham-fisted. (Zach Freeman)