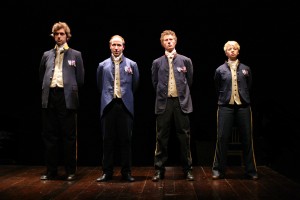 It’s a bit of a stretch, but you could almost call The Building Stage’s new show “The Frankenstein Expedition,” as much as it assembles multiple versions of a man into one, each performer contributing a separate aspect of this rough-hewn characterization of Sir John Franklin. In signature company fashion, the myth of Franklin is torn down to its essentials only to be put back together refreshingly new.

An officer in Queen Victoria’s Navy, Franklin mapped the majority of North America’s northern coast and led a crew of 128 men into the Arctic to explore the last leg of the Northwest Passage, where they became lost and were never rescued. This telling of his tale resembles partly a long-form improv performance, partly a music remix, partly a rehearsal of the play itself. Five performers take turns playing Franklin, both his wives and other characters, playing and replaying scenes from his life and his dreams, discovering something new each time.

The conceit works best when those discoveries happen within the scenes themselves. Too often the jam sessions between the actors offer little and delay the action, and distractingly they never drop their English accents. And when it isn’t too obvious that they’re self-satisfied with their irreverance, the performers’ horseplay is delightful. No one—performers or audience—ever really arrives at a conclusion about Franklin, but that’s the point. What the show gets right is that no single approach to a man’s story will ever tell it completely. (Neal Ryan Shaw)