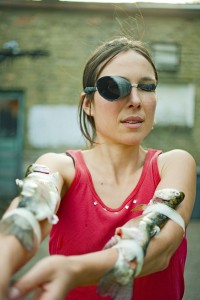 Why did you decide on such an intimate seating arrangement for The Thank-You Bar?

As I was making this dance about displacement and home, I was thinking about how we construct our home structures. So if my current home is in Minneapolis, I build my relationships, my work, my bus route—we create everything we need to consider someplace home. I was doing research with animal behaviorists. I asked them about displacement—like when we build a new building in an area where a certain kind of bird nests and it’s detrimental to these birds. Researchers talk about the capacity for adaptation that so many animals have developed. That humans and animals can, to varying degrees of difficulty, pick up and move our homes and build them again. This idea is so interesting to me that I tried building things. I tried building a beaver lodge. It isn’t used, but I tried creating a structure like a beaver lodge. I had a few seating arrangements in mind in terms of building a home for this dance, for the audience and the performers.

Why did you abandon the beaver lodge?

Well, I didn’t all the way. It’s adapted into one point in the dance. I did use it in one of the first informal showings. I brought a small group of friends into the beaver lodge and told them the story there. The beaver lodge is still under my friend’s front porch.

How do you think about the home you’ve created in the Dance Center?

There are parts of the piece that are adapted to each new space we bring the show. There’s a story at one point that, to tell, I have to do research on the building’s history, on the surrounding neighborhood. What history the building has in its walls, in its skin. And beyond that, thinking about what was here before the building. What the land was like before it was here and what it will be like in the future.

That’s probably a word I made up. People ask me—and it happens more often than you might think—when people find out I’m from Alaska, they’ll ask me if I’ve ever lived in an igloo. I think it’s an image people have about the north: that there’s snow all the time; that we all hunt. There are the preconceived ideas about a place that are very prevalent. To think of the home I grew up in and to have that in comparison to the question did I ever live in an igloo…it’s funny to me and at the same time it’s disturbing. 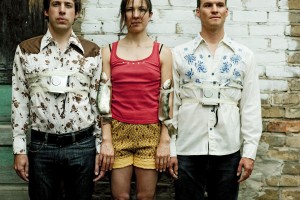 The release mentions you’re inspired by the travels of salmon. And the fish strapped to your arms…they’re not salmon are they? They look smaller.

Yes, they’re smaller than salmon. And salmon are a very strong part of my life; my family subsistence-fishes for salmon. It was always a time when the family would come together and do all the processing of hundreds of fish. Then we’d all have our fish for the year—canned, preserved, kippers—so learning that process was always very important. I was just up for the salmon run in July.

The Thank-You Bar started with the blackfish—it’s a fish in Alaska and I tell a story about it. You can’t get blackfish in Minneapolis, so at the time of the photo shoot, I used trout. They’re the closest in size and girth that I could get to blackfish. They’re in the photo but they don’t appear in the show. And then I ate the trout for dinner.

Would you like to talk about the musical collaboration?

The Thank-You Bar is my grandmother’s bar. She also lived there; so going to grandma’s house was going to the bar. In the back of the bar was a jukebox that had a lot of old country music. All the salmon processing I mentioned happened at grandma’s house. We would gather there for clam digging and fish processing, as well as visits and holidays, and the backdrop sound to all this was the jukebox. I have an amazing catalog in my mind of the music from the jukebox. I couldn’t name the songs or artists, but if one of those songs comes on the radio, I can sing along with it. And that’s how I started thinking about memories of home. How some things are in you, but you can’t access them. I was talking with Joel about this and he had just started working on a project deconstructing old country standards. It was ideal—they create sounds that are partly there and remind you of another song… sounds and phrases that come out of nowhere to you.