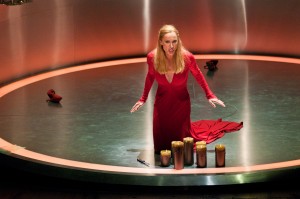 When outgoing Lyric Opera general director Bill Mason first announced that Chicago Shakespeare founder Barbara Gaines would be making her operatic directorial debut with Verdi’s “Macbeth, ” I was skeptical. Not that there wasn’t much to admire in Gaines’ imaginative stagings of more than thirty classics by the Bard at CST; it was the fact that she admitted that her previous opera exposure had been being “dragged” to the old Met as a young girl by her grandmother, that she didn’t know Italian, couldn’t read a score and would be learning the work off of CDs, and had not even known that Verdi had written an operatic adaptation of “Macbeth” before being asked to direct it. As artistic director of CST, would Gaines be willing to hire a director who barely knew the Bard and was illiterate and couldn’t read Shakespeare, I wondered?

Yet as Gaines’ new production of Verdi’s “Macbeth” that premiered at last weekend’s black-tie Lyric Opera Opening Night Gala overwhelmingly demonstrated, it doesn’t matter how you get there—Gaines even admitted having read “Opera for Dummies”—what matters is the end result. And in this case, the end result is something quite extraordinary.

Gaines has managed to successfully cross-fertilize the intimacy and intensity of CST, i.e., expanding the production into the house itself, using aisles for comings and goings, et al, with the spectacle, splendor and large scale of grand opera, truly a magnificent combination. Unlike Gaines’ colleague Gary Griffin who made his operatic directorial debut last season with a production that failed to use the vastness of the operatic stage, Gaines understands that the Civic Opera House is a much larger canvas than CST and rises to the challenge of compellingly offering a bountiful multi-course visual feast at every turn.

Most fascinating was Gaines’ decision to use the metallic Frank Gehry sculpture that crowns the Pritzker Pavilion in Millennium Park as the inspiration for designer James Noone’s set which not only adds a distinctively contemporary touch, but the silver of the structure reflects and amplifies the color scheme of every scene.

Gaines’ earlier theatrical staging of Shakespeare’s “Macbeth” was set in modern-day Iraq with the war as a backdrop, but with Verdi’s opera, she has chosen to be atemporal enough that the story could be occurring anywhere, everywhere. Unlike Gaines’ then having Lady Macbeth appear topless in a scene where the Bard has her speak of her plucked nipples, since Verdi does not set that scene, the operatic Lady Macbeth is not called upon to do so. (Although, German soprano Nadja Michael is not only built well enough but fearless enough to disrobe had that been asked of her, as she recently did in “Salome.”)

A departure from Verdi’s stage instructions that Lady Macbeth be ugly and sing coarsely is that Michael is drop-dead gorgeous and has a voice to match. Gaines hears Verdi’s music principally as a love story, which it is, but Gaines cleverly accentuates what a depraved and deviant love story it is. By juxtaposing the opening scene of witches—in the opera, an entire chorus (brilliantly sung by Donald Nally’s Lyric Opera Chorus) rather than the trio Shakespeare penned—surrounding a smoky and orange bonfire that they congregate and fly around like fugitives from Middle Earth, and following this with Lady Macbeth’s exposition staged as a private incantation of her own complete with candles and her climactically laying down in a circle to form a pentagram with her own body, Gaines makes clear who the real witch is, despite Lady Macbeth’s sexy appearance and stunning apparel, courtesy of Virgil C. Johnson. 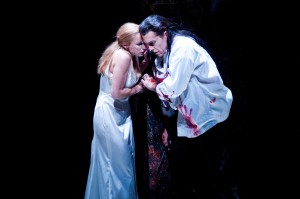 When Macbeth—brilliantly played by baritone Thomas Hampson as a tortured man strong enough to become king but weak enough to become putty in his wife’s hands—returns from murdering the king in his bed, his wife is so uncontrollably excited by his blood-soaked shirt that she takes the dagger and spreads blood around the crime scene and washes herself in blood in the process. The more power and blood that surround her, the more sensual she becomes. Yes, Macbeth is also aroused by her being turned on, but that becomes scary enough for him that despite their literally rolling around on the floor, he is having second thoughts.

Of course, this all climaxes in the banquet scene which, as was the case in Gaines’ Shakespeare version, nothing is left to the imagination. No metaphorical interpretation here: we see the demons that Macbeth sees as he starts to lose it at the dinner table, whether a grotesque, animated corpse emerging from the chandelier overhead, or a subtle yet horrific face emerging from beyond all three sides of the stage staring down accusingly at the proceedings. Even as the children of Macbeth’s rival are murdered, Gaines ruthlessly has the witches actually spirit them away and have them helplessly fly with them into nothingness.

If all of this were just a clutter-filled bag of stage tricks superimposed over Verdi’s music that would be one thing, but what is remarkable is how organic every aspect of this production is, how Verdi’s music actually guides and complements every decision that Gaines makes, an effect immensely enhanced by conductor Renato Palumbo consistently keeping musical textures transparent.

Even the often-problematic “happy” ending—where Verdi shifts our musical attention and allegiance to the new king after we as an audience have been shamelessly seduced by the Macbeths all evening and are made to feel virtually complicit in their crimes—actually works here; Gaines goes right along with Verdi rather than trying to fight the music and attempt to bleakly turn the proceedings towards a more authentically Shakespearian direction, an inspired and visually stunning choice that sharply delineates precisely how and why “Macbeth” the opera is such a delightfully different entity than “Macbeth” the play.