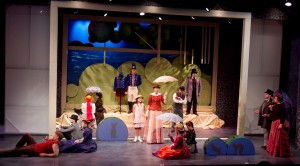 The works of Stephen Sondheim have been a Porchlight Theatre staple over the years, though thus far, the company has presented mostly Sondheim’s linear works with clear narrative and straight-ahead musical numbers; “Sunday in the Park with George, ” the 1984 far more abstract and, at times, virtually operatic Sondheim work about the genesis and contemporary significance of a major work of art that is a Chicago institution, namely, Georges Seurat’s “Un dimanche à la Grande Jatte” (“A Sunday on La Grande Jatte”), is an immense undertaking for the company that, happily, is paying off handsomely.

The production features a compelling video projection design by Liviu Pasare that makes sure that the cutting-edge twentieth-century art that we see represented in Act II are indeed as innovative as Seurat’s own nineteenth-century innovations that are the subject of Act I.

Sondheim, like everyone else, was fascinated with “La Grande Jatte,” and used to make trips to Chicago just to spend time with the painting in the Art Institute. Reading catalogs and anything else he could get his hands on about the work—which signaled a new style of Neo-Impressionism that used rounded splotches or dots rather than brush strokes—only to be disappointed about how little was actually known about it. We do know it took Seurat two years to paint the giant canvas and that he created various studies for it that have survived. Sondheim combined these details with the curious holes in the story of Seurat himself, including his death at age 31 of unknown causes, to construct a fascinating and cross-generational fiction.

The end result says as much about the influence and role of art in our lives as it does about Seurat, which has always been a huge part of its appeal. What often loses people along the way is that the same actor who plays nineteenth-century George in Act I plays his great grandson George in Act II (Brandon Dahlquist in this production), and that the actress who plays nineteenth-century love interest Dot also plays her daughter Marie (Jess Godwin), now an old woman in Act II; that same scheme holds true for other cast members as well, and usually, little attempt is made to delineate these characterizations. By doing so here, director L. Walter Stearns certainly makes the narrative more transparent, though the identifications that are to be made with the same cast in different roles across the centuries does become obscured in the process.

The piece is generally well-acted and well-sung, supported by Eugene Dizon’s offstage small ensemble which, because of its distance from the cast, makes for a less homogenous sound than would be ideal. The climactic moment, of course, when the various subjects of the painting carefully assemble in the finale of Act I, is a stellar moment of choreography supplied by Andrew Waters and is gloriously sung by the cast which, in a clever staging decision, remain there unmoved through the intermission. (Dennis Polkow)