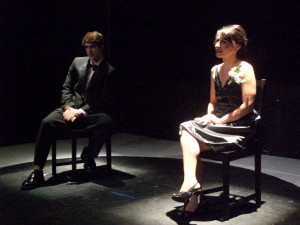 Considering what went down at Chicago Shakes last spring, it’s difficult to understand why a Chicago theater company would want to produce a Neil LaBute play. That aside, “Bash” is not necessarily one of his more nuanced works, and the production by Brikenbrak Theatre Project does little to elevate it beyond its basic manipulativeness.

Three short works comprise the evening. “Iphigenia in Orem” finds a mid-level businessman confessing to the suffocation of his infant child in a Las Vegas hotel room; in “A Gaggle of Saints,” a college-aged couple attend a fancy dress party in New York; and in “Medea Redux” a woman relates the complicated relationship she has with her son’s father.

April Taylor as the Woman in the final piece deserves credit for creating the only sympathetic character who has committed a monstrous deed. If the rest of the production had been handled with such care, it might have been more than a moral freak show. (Neal Ryan Shaw)