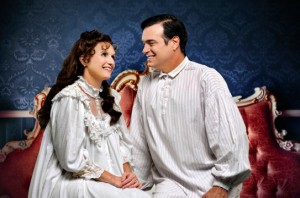 Kudos to Light Opera Works for once again digging into the canon of classic neglected works of the American musical-theater tradition for this year’s “Second Stage” presentation rather than presenting another revue as became custom for a few seasons.

“I Do! I Do!” was the third follow-up to Harvey Schmidt and Tom Jones’ stellar success “The Fantasticks, ” which opened in 1960 and would go on to break all records and play until 2002. Even in 1966 when “I Do! I Do!” opened, however, “The Fantasticks” had already been running for six years.

Written for Broadway veterans Mary Martin and Robert Preston, “I Do! I Do!” is a two-person show that traces the effect of marriage on a couple across a fifty-year period from the turn of the twentieth century. Since neither performer could sing at that point, the songs are largely recitative and require Broadway-style sprechstimme in the manner Lerner and Loewe had perfected for Rex Harrison in “My Fair Lady” and for Richard Burton in “Camelot.” Though Ed Ames did have a hit with “My Cup Runneth Over” at the time, none of the songs are particularly melodic, which makes it an odd choice to be staged by a company known for bringing high musical quality to its productions.

The end result is an “I Do! I Do!” that is well sung, to be sure, but do we really need to hear the notes of songs that were really written for their punchy rhythms and rhymes rather than for their music? Catherine Lord and Larry Adams work quite hard all evening and have a wonderful chemistry together, but at the end of the day this is a show conceived for—and is most effective when performed by—actors who can sing rather than for singers who can act. (Dennis Polkow)