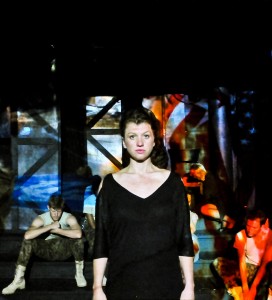 An “adaptation of an adaptation of a re-translation” of “Antigone, ” “Too Much Memory” retains all the quandaries of the original: moral sister demands burial of brother, clashes with conformist uncle, falls in love with cousin, tragic ending. Ah, the classics.

Anna Carini’s Antigone occasionally comes off as bratty instead of principled; she’s most effective when her character realizes what she’ll lose. We buy her relationships with lover Haemon (Brett Schneider) and sister Ismene (Cyd Blakewell). All three capture the pain of the consequences.

Kudos to Howie Johnson; his Creon is a leader you can sympathize with. But he lacks the compassion Antigone demands and therefore loses everything.

Director Anna Bahow doesn’t have to work too hard to apply the text to contemporary scenarios. Societal conformity shackles us then as now. Keith Reddin and Meg Gibson’s script blends the contemporary and the classic seamlessly. Big themes never die. (Lisa Buscani)