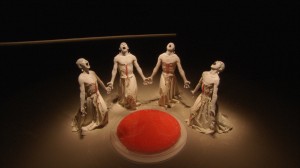 Cutting through the pitch-blackness, a flicker. A faint, pulsing light reveals a large, somewhat pod-like circle. Slowly, the expanse is illuminated, revealing a scatter of similar circles across the stage floor covered in sand. Water drips from somewhere overhead, as five bald figures, powdered stark white and cloaked in long, stiff white shrouds, lie in fetal crouches within halos of soft light. A sixth, identical figure stands stoically in the middle of this strange, vaguely ominous landscape. And then, the dance begins.

For thirty-five years, esteemed Butoh dance company Sankai Juku, with founder/director Ushio Amagatsu at the helm, has been crafting its singular performances, acclaimed by audiences in both its native Japan and around the globe. Through a collaboration between MCA Stage, The Dance Center of Columbia College Chicago, and the Harris Theater, the company makes its auspicious Chicago debut with a one-night only performance of its signature work, “Hibiki: Resonance from Far Away.” “I have always known that Chicago is a great city with a vibrant cultural life,” says Amagatsu via email, “and I was very happy to hear that our North American tour producers Pomegranate Arts had arranged an engagement of my work. Many years ago, we had the opportunity to perform in the outlying area, but this is our first time in the city… . It is a great honor.”

Originated in the sixties by Japanese dance icons Kazuo Ohno and Tatsumi Hijikata in reaction to the postwar social climate of Japan and its contemporary dance practices, the dance-theater hybrid practice known as Butoh eludes easy definition. Commonly featuring “playful and austere imagery, taboo topics and white body makeup with slow hyper-controlled motion,” Butoh has been adopted, adapted, embraced and expanded upon by artists all over the world. Since its founding in 1975 by Amagatsu—a dancer himself trained in ballet and modern techniques—Sankai Juku has been perhaps the most internationally recognized and revered Butoh company. Through a producing collaboration with Théatre de la Ville in Paris, Sankai has created a series of work (approximately one new piece every two years) that, according to Amagatsu, “expresses the language of the body…and presents an abstract vision of the infinite, evolutionary movement, the relationship of the body to gravity, and the relationship of gravity to the earth and the environment.”

In “Hibiki,” which features dancers Semimaru, Sho Takeuchi, Akihito Ichihara, Taiyo Tochiaki, Shoji Matsuo and Ichiro Hasegawa, with a score by Takashi Kako and Yoichiro Yoshikawa, the “cosmic cycle of birth, death and rebirth” is explored amidst a terrain that is at once desert and ocean—the curled-up bodies emerge from invisible cocoons, rising and falling as they struggle through an evolutionary journey. These figures grasp at the sky, at one another, mouths agape in silent cries. Even the smallest gesture is carried out with an expert combination of precision and delicacy. This is perhaps one uniting quality amongst the various incarnations of Butoh being practiced worldwide—a precarious balancing act between taut and slack, exertion and repose, tension and release. To achieve such fluidity, the body’s practice is rigorous. 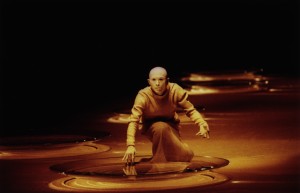 This is certainly true for Sankai Juku—their process of making work is meticulous and ongoing, as they couple devising new pieces with presenting existing works on tour. “I find that the daily practice of a dancer is their own individual responsibility,” says Amagatsu. “Of course we practice scrupulously before every performance when we are on tour and every dancer also has backstage or offstage responsibilities as well. We tour approximately six months of every year…. When I create a new production, I work with the dancers in a private rehearsal process that is not open to the public until the first performance. In our rehearsal, to focus inside of the body, we don’t use mirrors. Music is only used at the last moment of rehearsal as well.”

And as interest in Butoh gains momentum, drawing in Western audiences and practitioners, with training communities springing up in cities and university classrooms across the US, Amagatsu seems supportive of the evolving nature of its practice over the years. When asked about the global influence and future of the art form, Amagatsu responds, “I have heard that Butoh is getting more attention in some areas of the world outside of Japan, [though] I have not had the opportunity to see many examples myself. For any choreographer, what I hope is that each creator cares deeply about his or her own vision, and they will fully develop their own creativity.”