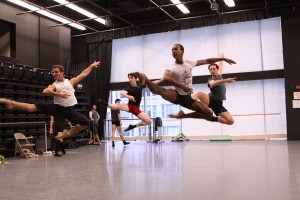 A spacious, sun-lit studio in the Joffrey Tower hums with activity. A pianist hammers repeatedly through a few bars of Stravinsky’s Violin Concerto in D, the solo violinist tuning and the musical director flipping through pages nearby. A few dancers do the same, lightly marking steps, eyes intent on their piece of mirror. The photographer from the Trib who rode up in the elevator with me situates himself near a visiting artist from Milwaukee who sits in a corner, sketching. Ashley Wheater, the artistic director, walks about, conferring with soloists and musicians, then draws everyone’s attention and rehearsal begins.

This morning, the company is working on George Balanchine’s “Stravinsky Violin Concerto,” part of its Fall “All Stars” program—a tribute to New York City Ballet legends. The opening Toccata section of “Stravinsky” is vibrant and painterly: dancers enter and exit in groups of five, building to a grand ensemble finish to the movement, the shapes they trace through space giving a strikingly literal visual shape to the rigorous, intricate strokes in the score. Two duet sections follow, the first an angular, modernist pas de deux peppered with isolations and distorted motions accenting aural dissonances. The second is more lyrical, tender and danced by three different couples throughout the ten-performance run. 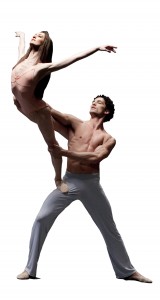 One of the couples, Victoria Jaiani and Temur Suluashvili, I was told has two noteworthy features: they both hail from Georgia—the region of the former Soviet Union from which Balanchine drew inspiration for the folk dance-inspired elements of the piece—and they are married. Given these facts, I awaited the second duet with a particular set of expectations. One is met; Ms. Jaiani, impossibly thin, impossibly pliable, matched by her husband in both endurance and technical precision, appears the quintessential Russian ballerina. The other melts away, inconsequential, as the pas de deux unfolded. Tenderness was there without question. A particularly challenging section of the duet calls for the man to rotate his partner at the ribcage, her torso draped like a shawl over his arm. Mr. Suluashvili handles his partner’s weight, aided in no small part by Ms. Jaiani’s ropelike spine, with a gentle strength that spoke comfort with the body in his arms. But the tenderness—resonant, instinctual—comes from a different place than affection for a spouse. As does the moment when Ms. Jaiani pauses before lightly placing her hand in her partner’s, or the final phrases of the duet, when the couple gazes together over Mr. Suluashvili’s outstretched arm. As technically demanding as it is, the moments that breathe life into the duet are the moments Balanchine leaves between steps, when kinesis stops and the depth, the source of the dancing is revealed. Love of one another, sure, but love of their own movement makes the couple truly captivating, not to be missed. (Sharon Hoyer)