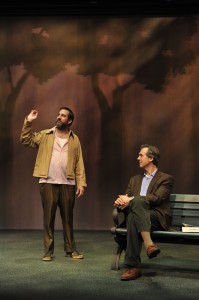 Fifty years after his superlative one-act “The Zoo Story,” a stunning confrontation of class, dehumanization and loneliness between two men on a bench in Central Park, Edward Albee has added a first act, “Homelife,” that does more harm than good in attempting to clarify and frame the second. “Homelife” gives a backstory for Peter, the formerly archetypal upper-middle-class businessman whom desperate boarding-houser Jerry tries to connect with in “The Zoo Story,” but “Homelife,” which revolves around a cliché-ridden, stilted set of exchanges between Peter and his wife about passion and sex, manages to be utterly banal and overly precious despite descriptions of anal rape, circumcision and unnecessary repetition of verbs like ‘fucking’ and ‘jamming.’ Moreover, it’s painfully self-conscious about parallels with “The Zoo Story” (“symmetry” is an oft-repeated word between the couple in conversation). “Homelife” is simply dead in the water despite valiant and deeply intelligent efforts by actors and director Dennis Zacek. “The Zoo Story” is another story—Marc Grapey as Jerry is a true revelation in the second act, which in its richness and vibrance throws into relief just how derivative and hollow “Homelife” is. “The Zoo Story” is just as funny, dark, haunting and sharply-written as ever; and that it’s worth sitting through the first half to see speaks volumes. (Monica Westin)