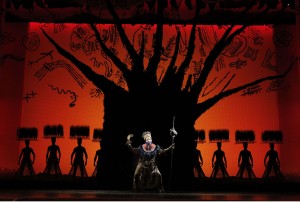 How “The Lion King” became king of the Broadway jungle is one of those lion’s tales so odd, it could almost be made up. 1994, the year that the original animated version of “The Lion King” was released to theaters, was also the year that Disney Theatrical, the stage arm of the Disney company, opened its first Broadway production, “Beauty and the Beast.” Though a huge commercial success, the show was snubbed by the Tony Awards, having been nominated in nine categories but only winning Best Costume Design.

That was taken as a clear message to Disney from the theatrical community that such ready-made shows that did not depend on the talents and contributions of that community were not going to be acknowledged by that community. To its credit, Disney got the message, and when it set out to transform “The Lion King” from cartoon to stage, it allowed director Julie Taymor a complete re-imagining of the property that was so stunning that it won six Tony Awards, including Best Musical.

What is so amazing about both Taymor’s transformation and how strong a production “The Lion King” remains as a stage musical more than a decade later is how vacuous a dramaturgical entity the original property actually was: “The Lion King” animated feature was the first time that Disney created an original story for a full-length cartoon without at least loosely basing it on a classic fairy tale or literary work, and the vaudeville-like quipping that had most notoriously bogged down “Aladdin” often became a substitute for storytelling (fart jokes and groaners remain intact, even in the stage show). It also didn’t do much for family relations to make the uncle such an unambiguous villain.

Musically, the lion’s share of the score is the product of film composer Hans Zimmer, though it contains Elton John’s best songs written for a stage show (with his best show lyrics, supplied by Tim Rice), even if inadvertently since they were originally written for an animated feature. One of their songs that was cut from the original animated version, “Morning Report,” was added to the stage show and used so effectively that it was restored to later theatrical releases and home-video versions of the cartoon. Oddly, it is nowhere to be found in this touring show, a strange omission for such an otherwise elaborate production. 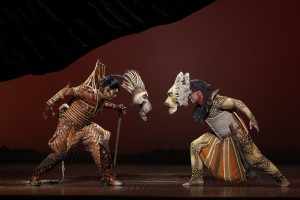 The Western pop style of the Elton John/Tim Rice songs are rendered far more palatable for the narrative’s African setting in the stage show by having been rearranged in a more African style, complete with two sets of African-instrument percussionists flanking both sides of the stage. Key dramatic moments of the show that previously were spoken here have been transformed to choral ensemble numbers by Lebo M that are the most musically memorable moments of the show, especially the powerful Act II “One by One” opening and the number used to show Simba his relationship to his deceased ancestors, “He Lives in You.”

But the real star of any production of “The Lion King” is the stunning visual feast that the show supplies at every turn, from the golden sun that appears in the opening “Circle of Life” and the velvet night of stars over the grasslands in “He Lives in You,” and of course, the inspired idea to place actors in animal costumes with African-style masks and also incorporate large, hollow puppets into the mix and have all of these actually interact directly with the audience. “The Lion King” remains one of the few recent Broadway properties that completely transports audiences of all ages to another realm, inspiring all of us at every stage of the journey. (Dennis Polkow)