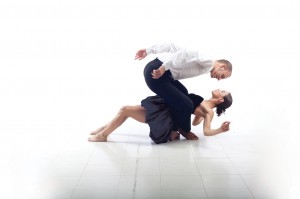 Last year, the founder of Luna Negra Dance Theater left the company to take charge of Ballet Hispanico in New York. Under Eduardo Vilaro’s leadership, the company established itself not only as a forum for Latino contemporary choreographers, but a presenter of some of the most imaginative, passionate and technically accomplished modern dancing in Chicago, period. Personally, I was sad to see Eduardo leave our city; he is kind, accommodating, generous with his time for rehearsal visits and interviews, and always a delight to speak with. Upon my visit to a Luna Negra rehearsal for the upcoming fall program, I knew very little about his successor, Gustavo Ramirez Sansano, beyond his past choreographic contributions to the company.

From what I saw, Ramirez Sansano is staying true to the company’s vision. His own new piece, “Toda una Vida,” is equal parts playful and emotional, a duet—a wrestling match really—originally inspired by Sansano’s parents and their enduring marriage. The piece is set to two Boleros, starting with Ravel’s famous composition, the couple on opposing corners of a stage bisected by a long tube. They sidle and flirt and glance at one another, gradually working their way to the divider, stealing steps across the line, building to first contact with the same slow fire that fuels Ravel’s repetitive score. The dancers, brought along to Luna Negra by Sansano from his own company, own a unique movement style and maintain it (at least halfway through the piece, as far as I saw) even after they start sharing axes and tossing one another about. Tall, lanky Zoltan Katona moves energy and shifts through levels like a capoeirista marionette; tiny powerhouse Monica Cervantes spins, tumbles, leaps onto and over Katona. He in turn lifts her with a shin or forearm and she takes a short flight to land, spin and tackle him again in a blindingly intricate series of gravity experiments. Like most intimate relationships, it is alternatively, sometimes simultaneously, both play and battle. They grapple with one another the way young couples do, with sexual aggression and childlike affection, all the while Ravel’s epic, iconic melody climbing a sonic mountain, step by step.

“This is why I chose this music—one tempo, two melodies, through the whole sixteen minutes,” Sansano said afterward. He is quite young, stunningly handsome, with a happy, open demeanor. Of the tube dividing the stage he says, “It reminds me of something that can get stretched too tight, that can break. Or to cross the line: I go into your space, you go into mine. Also, my parents were born in the dictatorship; they couldn’t touch, they couldn’t kiss.” I ask if his parents will see the performance. They won’t; his mother has to stay in Spain for medical appointments. “My father is not a traveler,” he says with a smile. “He is really, really Spanish. Like, he only eats Spanish food. Not even pizza.” 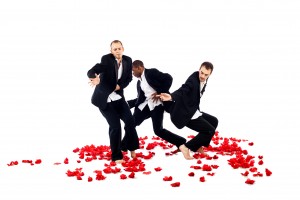 When I ask if the transition to new leadership was difficult for the company, he tells me many of the dancers are new—seven or eight of them—so no major adjustment really took place. Remarkable, considering the consistency of vision I witnessed stopping into rehearsal for a piece by Brazilian Fernando Melo. Five men were working with Melo’s assistant, who was adding a new section to the piece. One dancer audibly inhaled and rose like an inflatable doll, then would deflate to the floor on an equally audible exhalation. The other men join, one by one, carrying on a sort of conversation with breath. The rehearsal director explained to me that Melo was expanding the preexisting eight-minute piece to about twenty, adding choreography via Skype and watching videos of the rehearsals. He was due to arrive the week before the performance to work with dancers. Melo’s assistant was clarifying a series of inhalations, making sucking-in noises at different tempos while pointing to dancers one by one. She then described the set to me: a stage within a stage surrounded by walls with windows at different heights. Four of the men deflated together to the floor. The dancers pick up props at one point and use them as they move away from the smaller stage to play with the varying levels of windows. Confused about the order of inhalations, three of the men inflate at the same time, the other two staggered sound like getaway balloons. Laughter erupts. Leadership has changed, members have rotated, but the vision—sharing a universal language of joy and exploration—continues.