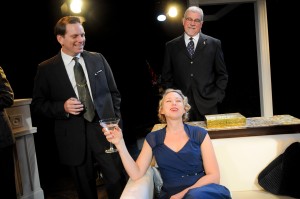 Russel Crouse and Howard Lindsay’s 1946 Pulitzer Prize winner creaks occasionally; the exploration of political deal making is still relevant, but the Thomas Dewey jokes may be lost on the 2010 crowd. The performances are serviceable but the piece needs the urgent idealism of a “Mr. Smith Goes to Washington” and never quite achieves it.

Geoff Button’s direction lets the pace drag a bit; the first and second acts are in sore need of the popping satirical energy of the third. Marianna Czaszar’s set is utilitarian early American and period quaint, but Joanna Melville’s costumes commit a couple above-the-knee gaffes. The Republicans would never stand for such immodesty. (Lisa Buscani)