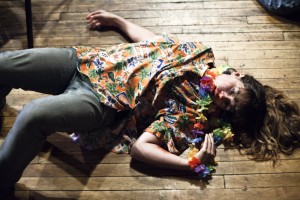 Described as “a murder mystery, meets Tony & Tina’s Wedding, meets zombies,” “Zombies Attack Chicago” returns to Uptown’s The Spot (4437 North Broadway) on Thursday for its third straight Halloween run. Not so much a play as an “interactive theatrical event/zombie attack simulation,” “Zombies Attack” puts its audience at ground zero of a zombie outbreak and then lets them take it from there. “It’s a zombie movie you can be a part of,” says the show’s creator, Zack Geoffroy. “The military barges in to take over the bar because of a bio-terrorism threat, then someone turns into a zombie, and things get a little hairy.” The actors have a basic story to work from, but it’s the audience that gets to decide the direction it goes in: who to interrogate, who to quarantine and, most importantly, who to kill. It’s literally a different show every night. “It completely depends on the audience,” says Geoffroy. “It can get really interesting if the audience is interested in the background of the story, but with drinkers usually they just want to see blood. That’s the half-hour show.” Which, Geoffroy is quick to point out, is not necessarily a bad thing. “We’re not worried about the run time, we’re worried about the body count.” (Jonas Simon)