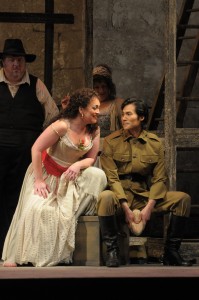 The Chicago Symphony Orchestra is not the only arts organization that has experienced an unexpected cancellation this fall: Lyric Opera planned an entire production of Bizet’s “Carmen” around the Lyric debut of mezzo-soprano Kate Aldrich in the title role a mere five years after it last presented the popular warhorse, only to have Aldrich cancel due to complications from a pregnancy.

Though one sympathizes with Lyric, a pregnant Carmen canceling can hardly be a surprise, especially when Aldrich also recently cancelled an engagement at the Met. Lyric’s solution was to simply cast the Carmen it had originally scheduled for a single October 29 matinee that Aldrich could not make—Iowa mezzo-soprano Katharine Goeldner—in all of the Carmens that Aldrich was originally scheduled to sing.

There is no question that Goeldner, heard here as Suzuki two seasons ago in “Madama Butterfly,” has a pleasing voice and stage presence, but when you’re doing “Carmen,” the one opera that virtually everybody knows—even those who have never been in an opera house thanks to countless parodies, cartoons, sitcoms, plays, movies, commercials and the like—you need someone who can be dramatically as well as vocally convincing as the gypsy temptress.

In that regard, Goeldner’s Carmen is a seductress in search of seductiveness. It isn’t a question of mere attractiveness—there have been far less attractive yet effective Carmens than Goeldner—it is an issue of attitude and swagger. The entire opera hinges on Carmen being self-confident and what attracts Don José to her—and indeed, to operatic audiences everywhere—is her wild and reckless freedom, the very quality that ultimately makes it impossible for her to settle down with José and makes him so jealous he ultimately destroys her. There’s something terribly amiss when it is Don José, not Carmen, who stops the show (with the Act II Flower Song), not to take away anything from South Korean tenor Younghoon Lee, a sturdy lyric tenor who is making his Lyric debut in these performances. 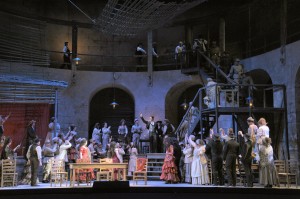 Not helping matters in terms of dramaturgy is that Kyle Ketelsen’s Escamillo, though well sung, is also lacking the confidence needed for the arrogant yet likable ham of a bullfighter, and that Cuban-American soprano Elaine Alvarez’s Micaëla, José’s girl back home, has more spunk and spark than Carmen, raising the question of why José would leave her back home for a temptless temptress.

French conductor Alain Altinoglu, also making his Lyric debut, brought much French color to the Lyric Opera Orchestra, but the rhythms and drive of the piece were eluding him opening night, especially in Act I, where at several key ensemble moments he was unable to keep the chorus and orchestra tightly together. (Dennis Polkow)