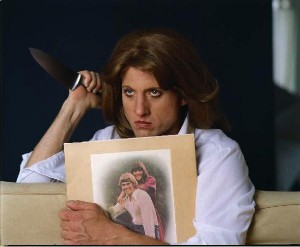 Watching a young Michael Myers reach for a kitchen knife as a gently crooned version of The Carpenters’ “We’ve Only Just Begun” rolls over the audience (along with a great deal of smoke-machine fog), it quickly becomes evident why The Scooty & JoJo Show’s “Carpenters Halloween”—a multimedia smorgasbord of video, puppetry, live music, and cartoonish props that crosses John Carpenter’s “Halloween” with the music of The Carpenters—has become a Chicago cult favorite now in its fourth year of production. As teenager Laurie Strode, director and co-creator Scott Bradley leads a cast of actors (and puppets) in an almost word-for-word re-imagining of the classic horror film, with Myers, still surprisingly spooky even when surrounded by lampoonery, stalking the cardboard-cutout neighborhood of Haddonfield, Illinois while a frantic Dr. Loomis puppet searches for him. The camp factor is appropriately high and the Circuit Nightclub, with its dangling disco balls, offers a more than suitable backdrop for this laugh-out-loud tribute. (Zach Freeman)