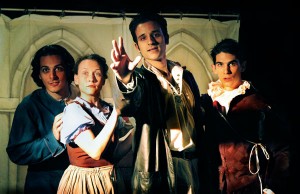 The Underground Lounge in Wrigleyville probably isn’t the first venue that comes to mind when you think of the best place to stage Shakespeare. But that’s just the assumption that Filament Theatre hopes to undermine with “Choose Thine Own Adventure,” which is exactly what it sounds like. Hoping to recreate the experience that Shakespeare’s groundlings had at the Globe Theatre, Filament has devised an interactive night of classical theater using an entertaining mix and mash of the Bard’s best-known scenes. The contemporary analogy of the dingy bar is nearly perfect, in fact, giving us the freedom to interact with the players and even sneak off to the bar for a refill, although the groundlings were never given quite such license to determine the course and outcome of the play. The ingenuity of Allison Powell’s adaptation—which ensures that no two shows will be alike—is evident, and the four-person ensemble know just which of the audience’s buttons to push. Shakespeare scholars and punters alike will find something to enjoy. (Neal Ryan Shaw)