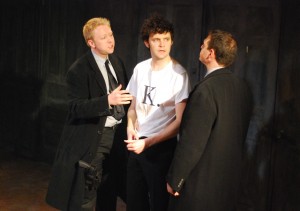 Greg Allen’s adaptation of Kafka’s “The Trial” is a fairly standard treatment for the Hypocrites: with a lot of poetic license, Allen replaces vast amounts of the original text with self-aware banter that constantly draws attention to its own recycled nature. What results is a play that’s much lighter than reading Kafka; the ominous, heavy tone of “The Trial” is replaced by something of a bedroom farce, with constantly slamming doors and sex jokes about how arousing an accused man is. Allen also plays up the connection between the plot of the novel—a man is tried for a crime neither he nor the audience know the nature of—and improv acting, and Brennan Buhl as main character Josef K. borders on precious in his adorable self-aware aiming-to-please showman/buffoon who slowly gains awareness and nihilism. The other actors handily take on the farce with sustained energy and intelligence. But in the second half of the play, the parodic momentum grinds to a halt when the show suddenly takes on all the heaviness of the original novel, and then some; we’re simply not prepared in the last half hour for solemn K. and a priest arguing passionately over the interpretations of another famous Kafka text about fate and law, and there’s no reason for us to care when the trial finally does end and K. meets his fate. The play is meta-theatrical to the point of trying too hard, and there are so many references to Kafka’s other stories and novels (Joseph has a dream about waking up as a cockroach, etc.) that it’s easy to feel a sense of intellectual anxiety about how much the story has been watered down (at one point the novel, or “scripture,” is called “too literary”). Ultimately this sense of effort—along with the play’s gratuitous nudity, blowjob jokes, and jarring moments of surrealism—hit us over the head with how clever the show is supposed to be, making it hard to enjoy. (Monica Westin)