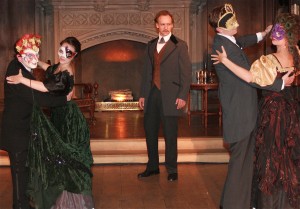 World-premiered by First Folio Theatre for Halloween 2006 and reprised a year later, it has been three years since Mr. and Mrs. Edgar Allan Poe have haunted the halls of Mayslake in west suburban Oakbrook Terrace. Dramas about Poe’s personal life and adaptations of his best-known short stories are a virtual cottage industry but kudos to First Folio managing director David Rice for a brilliant cross-fertilization of both types of Poe plays into a single, interactive audience experience that uses the magnificent space of the actual thirty-room Tudor “Peabody’s Tomb” mansion—considered haunted in Chicago folklore for decades—as an opportunity to spend an evening with the Poes and the characters of his best-known works.

Ushered into the cavernous library of the estate, Poe in the persona of actor John Sanders—making his debut in the role since Larry Neumann Jr., who created the role, is busy over at Steppenwolf as the chilling villain of “To Kill a Mockingbird”—welcomes you as guests as the real Poe would do, reading “The Bells.”

We meet young Mrs. Virginia “Sissy” Poe (Diane Mair reprising her original role) and learn of their intense love affair in the Poe dining room and of the death of Poe’s mother and stepmother in his childhood and later of even his young wife, all by consumption, which the play uses as an implicit explanation for Poe’s macabre literary fixations. “Ligeia” takes us into an abandoned church (for real, by the way, since the Peabody mansion was a Franciscan retreat house in a past life) for a story that takes place in an abandoned abbey. Then it’s up the hand-carved wooden staircase to an attic—with Poe reciting “The Raven” for you on the way—where actor Robert Allan Smith, returning from the original and stealing the show with his literally in-your-face intensity and uncomfortably palpable anxiety descending into gradual madness in “The Tell-Tale Heart” and as the prisoner who meets a cutting-edge fate in a blackened torture chamber in “The Pit and the Pendulum” before heading down for a family dance party that re-enacts “The Masque of the Red Death” complete with death, cloaked in red, making a chilling appearance.

First Folio has experimented with other Halloween shows the last couple of seasons, but none have had the impact of this extraordinary and interactive play, which has been given a remarkably effective set design, lighting and directorial makeover that serves to enhance the ambience and proceedings, though the overhead spotlights in the library are an unwelcome distraction.

No, Sanders’ Poe is not as effective as Neumann when it comes to the soliloquies, but he offers an effective contribution of his own by being more at home in the domestic scenes. And it is a real tribute to the strength of Rice’s work as a playwright that his material is rich enough that it can obviously hold up to multiple interpretations of its title character, not unlike the way that the Goodman’s “A Christmas Carol” constantly reinvents itself with new Scrooge portrayals. Here’s hoping that the show remains a Chicago Halloween tradition. (Dennis Polkow)