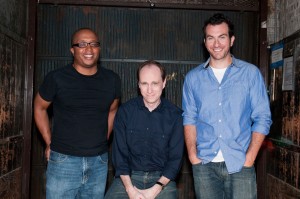 Steppenwolf’s sixth annual “First Look Repertory of New Work” includes readings of plays about family values in contemporary life—lesbian parenthood, recession mentality—but the three full productions running in rep are most striking for the way they look backwards to past history and plays. Robert O’Hara’s “The Etiquette of Vigilance” imagines the Younger family’s contemporary history in an updating of Lorraine Hansberry’s “A Raisin in the Sun.” Jason Wells’ “The North Plan” imagines an anarchic, not-so-distant American future that combines archetypal American dystopian elements with web 2.0 technology; a bureaucrat and an administrative assistant hack into a database that lists who will be persecuted by the new world order. And Sam Marks takes up the theme of artistic fame and the ironies of posthumous fame that have long been touchstones of American theater. We spoke with Marks about this year’s festival the week before it opened.

What do you make of all three playwrights chosen this year dealing with the inheritances of life and theater past?

It’s funny, there’s another play called “Old Masters” [Simon Gray], but I didn’t know about it while writing mine—it was an accidental thing. For me, the title isn’t actually words that are spoken in the play, but it contains a double meaning having to do with a painter dealing with his past and how he tries to shed his past moving forward in his life… what sparks this process are some paintings that do look somewhat classical and refer to old masters. Paintings here act as a catalyst for personal change…. I think that you’re correct in saying that all the plays have a past, whether idyllic, flawed, damaged, that fuel for the action in the present. It’s certainly not unique to these three plays, but it’s interesting.

You grew up as the child of actors—another artistic world.

Growing up in the theater, my parents were in show business, but that was just his job… Art for me is less about its people and its relationships, not material for a dissertation. Art for me serves as a currency for drama.