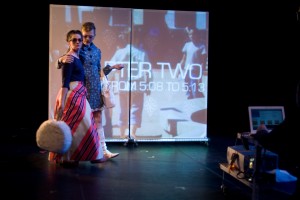 Ask me what I thought about the film “Cleo from 5 to 7” and I would tell you two things: that I remember very little save a woman walking around for a couple hours and that it’s absolutely brilliant. Big Dance Theater directors Annie-B Parson and Paul Lazar were in a similar recognitive location when they picked up the script of “Cleo” to use as the framework for a new performance.

“We made the decision to work with a film script from the French New Wave era. The rule we gave ourselves was that we could work with the script but we could not watch the movie, ” Mr. Lazar tells me over the phone. “Maybe somebody’d seen it years ago, but we were sufficiently unfamiliar with it so that nobody was dominated by their images of the film. Our memory of it was pretty distant at best. We were using the script as an artifact.” He adds, “I’m glad we did because it caused all kinds of fertile problems.”

The problems caused by translating a bare-bones film script to the live stage resonate in a way with the problems addressed in Agnes Varda’s script. A woman (a beautiful pop-singer…this is 1960s Paris after all) goes about the mundane activities of a late afternoon while anxiously awaiting the results of a biopsy. A professional performer performing the banalities of her own life: how does one keep up the illusion? What happens in the gaps?

The gaps add flesh and blood to Big Dance Theater’s widely acclaimed “Comme Toujours Here I Stand,” which layers story upon story and reveals the truth to be mined in spaces between scenes. For example: each of the performers has an “on-screen” and “off-screen” personality as it were, enriched by the use of live film and projection on moveable screens. We see live performance heightened by close-ups, cutaways and editing. The live performance itself is deconstructed in moments paused and replayed. Lazar describes the physical language of “Comme Toujours” as a dance-like element of the piece. “The way everyone moves throughout the piece has an exactitude about it,” he says. “There’s also little bits of non-realistic physicality and gesture that gives some of the feeling of film that you can run it back or run it forward and it’s identical each time.” A pure dance section occurs near the end of the piece, a singular departure from the plot and script. 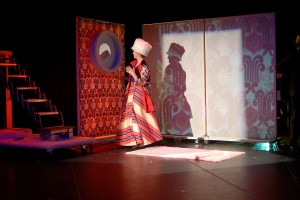 Parson started Big Dance Theater originally as a purely dance company. Lazar was a dancer in the company when they were asked to put on a play at NYU. “It played into our theatrical inclinations and I filled the co-director slot,” Lazar says. “That particular piece with that particular group of people at that particular college went much further than we anticipated. It got picked up by a theater and reviewed very well,” he pauses. “We were sort of nudged into theater stuff by circumstance. It was a happy accident originally.” He pauses again.

The history of “Comme Toujours” could also be told as a happy accident if one were so inclined. The piece began as a commission by the Alliance Francaise in New York. Due to a miscommunication, Lazar and Parson thought the subject matter had to be French. Not true, but the self-imposed guideline led to a remarkable work of art about the fragile, fleeting nature of beauty and the fear of death.

While discussing the logistical complications of staging a film that centers around a main character wandering from place to place, Lazar tells me the film was consulted once. The unifying thread turned out to be the one broad element of the film I remember from viewing it years ago. “Toward the end of the process of creating the piece, there was one final piece that we couldn’t sew together. Annie finally cheated and she watched about twenty minutes of the film. She was sick because the film is so brilliant she felt dwarfed by it. But she had one idea and it made the whole piece coalesce. It was a recurring motif of the protagonist walking back and forth and the sound of her heels clicking. It’s a motif that returns and offers us the elbow room to keep changing and changing the stage to create the fluidity of film.”