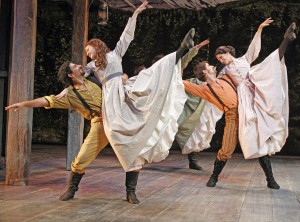 Ordinarily, “Seven Brides for Seven Brothers” is a throwaway show for regional theaters, allowing a large cast of dancers to take the spotlight and giving actors and singers some time off. Not so this time: the sumptuous Drury Lane production of “Seven Brides” is a wonder to behold on every level.

The 1954 film began life as a demonstration for the then-new wide screen process called CinemaScope: what better way to showcase what wide screen could do than to have no less than seven main characters, all with their own respective brides. The challenge for director Stanley Donen and choreographer Michael Kidd was to fill up the entire frame with some of the most elaborate and exuberant dance sequences ever put on film. Although an Aaron Copland-like score was provided by Adolph Deutsch and Gene DePaul wrote some nice songs for the occasion with lyrics supplied by Johnny Mercer, the film was conceived primarily as a CinemaScope showcase for dance.

Amazingly, it was twenty-five years after the film that Al Kasha and David Landay had the idea to adapt the film for Broadway but the film had only eight songs, so seven new songs were written by Kasha with Joel Hirschhorn. No one is going to pretend that the Kasha and Hirschhorn songs match the quality of the DePaul/Mercer songs, but some of them are quite nice and flesh out the story a bit. Given that dancers rather than singers are usually cast in the roles, the music, such as it is, is rarely showcased to its best advantage, but in this production, the music is presented at as high a level as the dancing.

From the moment that buckskin-clad veteran Broadway actor Steve Blanchard takes the realistically rustic stage singing “Bless Yore Beautiful Hide” with his big booming baritone voice, he takes full command. Likewise, Abby Mueller makes a delightfully spunky yet charming Milly and sings her songs gloriously as well, the two having a wonderful chemistry together. But most surprising and effective is the way that director Bill Jenkins is able to delineate actual characterizations from each of the seven brothers—and to a lesser extent the “brides” as well which were never as developed in the script—each emerging with his own distinct personality. Those characterizations are maintained throughout Tammy Mader’s Kidd-inspired choreography. (Dennis Polkow)