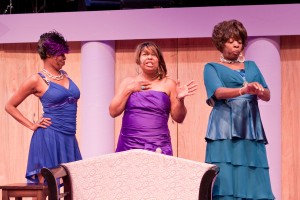 Anyone intrigued by the fact that this company has been able to break ground on a $16 million theater construction project, in this economy, is advised to check out “The Other Cinderella” and you’ll quickly see what makes them special. Founder Jackie Taylor’s first production—she’s the writer and director as well—when she started the company in 1976, it’s been updated and remounted many times by BET over the subsequent three decades. But the essence remains: a retelling of the fairy tale in a kingdom nearly wholly populated by people of African descent, some from the ‘hood, some from the palace, one that reworks what I’ve always disregarded as a child’s story into raucous adult entertainment (albeit still family-friendly). With a live funk-soul band putting the spirit into the all-original songs, ranging from soulful ballads to blues to funky jams (the show’s seventies origin predates rap, though the spirit of hip-hop is certainly present), and a hilarious script that plays freely with black stereotypes, “The Other Cinderella” simply rocks the house. A uniformly topnotch cast, highlighted by the charismatic Rueben Echoles as Page and Rhonda Preston as stepmother Theresa and the hilarious Katrina Miller as stepsister Margarite, brings an ebullient energy to keep things moving briskly. The step-family—Miller, Preston and Robin Beaman as stepsister Geneva —could be a show of their own (they could take a spot on “Saturday Night Live,” as is). Since their story takes on special resonance here—an unconventional family headed by a working-class single mother—you can’t really see them as evil, even when they persecute the gentle, ambitious Cinderella (played with Beyonce-like charm by Candace Edwards): they’re just too damn funny. (Brian Hieggelke)