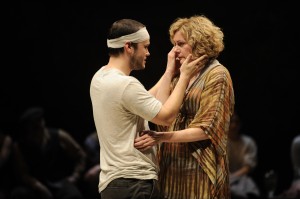 A scene late in the first act says everything about Anton Chekhov’s “The Seagull,” and about Goodman Theatre’s powerful production. It’s a reconciliation between the larger-than-life (especially in her own mind) actress Arkadina, played to self-absorbed perfection by Mary Beth Fisher, and her overshadowed, would-be artistic son, Konstantin, depicted by the suitably brooding Stephen Louis Grush. Tender, gentle, we see the mother and child emerge in these two characters but then, an assertive inquiry tests the new waters of intimacy and soon the tenderness has turned into vicious conflict. Not only do the themes at play in this scene—intergenerational struggle, the capricious ways of the heart, the fight for the artistic soul and so forth—define “The Seagull,” so too the acting challenges in performing a scene with such a rapid yet precisely paced tonal swing that could so easily come off as forced or, even worse, laughable. Fortunately, director Robert Falls has gathered some of the finest actors working in Chicago—perhaps one of the best ensembles ever assembled on a local stage—and, not simply content to let them do what they always do, has rehearsed the play for seven weeks, double the normal time. The result is a Chekhov production to rival the finest anywhere (notably reminiscent of Maly Drama Theatre’s “Uncle Vanya” at Chicago Shakespeare in March), one where, with a minimal set and lighting (in fact, the first scenes are performed in full house lights), all the stakes are placed with the actors, who sit along a back bench when “offstage” to further emphasize their ownership of this production.

Falls, who has a reputation these past few years for staging big, over-the-top productions, has let it be known that this was to be a major shift for him and it certainly is, though he is not one to let simplicity rule him. Instead, he dove into a study of Stanislavsky’s legendary staging of “The Seagull” (its earlier premiere had been botched by underrehearsed actors and was greeted with laughter), which led Falls to his actor-intensive approach. In addition to Fisher and Grush, notable performances by Steppenwolf treasure Francis Guinan as Sorin (making his Goodman debut!) and Steve Pickering and Janet Ulrich Brooks as husband-and-wife Shamrayev and Polina highlight an ensemble of uniform vigor and quality.

Stripped down it may be, but Falls could not resist having some fun with his critics. The play opens with two workman struggling to roll a big rock onto the stage, where it will be used for Konstantin’s comically pretentious play within the play that occupies the first scene. Falls opened his “Desire Under the Elms” with a similar act, a struggle to move a rock around the set. It’s as if Falls is reminding us, both actors and audience, that this is still his show. (Brian Hieggelke)