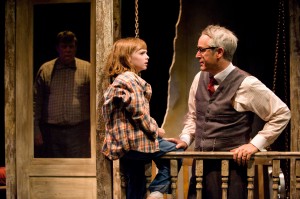 Celebrating the fiftieth anniversary of the publication of the Harper Lee novel that remains one of the most beloved books of recent decades, Steppenwolf for Young Adults is presenting Christopher Sergel’s dramatization for a short run of weekday matinees for schools with weekend performances for the public.

Wisely ignoring the also-beloved film adaptation, no easy task, Sergel and director Hallie Gordon give us the adult Jean Louise as a young adult writer (Carolyn Defrin) at a typewriter overlooking the stage, actually reliving in her mind’s eye the wonder and adventure that was her Depression-era childhood in Alabama. Very little of the novel’s exposition is dramatized in this whirlwind two-hour adaptation, which moves quickly to ground the events surrounding the trial of a black man accused of raping a young white girl in a segregated South.

It is a curious juggling act, having Jean Louise look down at all that is transpiring, but also having the three children, Scout (Jean Louise as a child, played by Caroline Heffernan), her brother Jem (Bubba Weiler) and their overdressed literate friend Dill (Zachary Keller), who functions as the “outsider” to the community, underlining that Jean Louise is recalling these events from a child’s perspective. That fact becomes especially potent when the adult Jean Louise’s space becomes the balcony where the African-Americans and the children join her for the trial scene where we, the audience, become the courtroom audience—even the jury itself—with the theater lights turned up and the witnesses in part addressing their testimony directly to us.

The pivotal role of Jean Louise’s father, the lawyer Atticus Finch, is here refreshingly underplayed by Philip R. Smith. Not to take anything away from Gregory Peck’s iconic film performance, but there is an idealistic, almost messianic air about Peck’s Atticus from the moment we encounter him. With Smith’s portrayal, Atticus is an ordinary overworked and slightly burned-out father who doesn’t always have the time for his children that he would like. He is here perhaps an even less-than-ordinary lawyer who gets an extraordinary case that incenses him enough to rise above himself, at times, even to his own surprise. Likewise, Abu Ansari’s Tom Robinson, the accused, is also understated, not every word he utters coming off as if Paul Robeson were in the courtroom, but as just an ordinary and very frightened black man who is falsely accused and being judged in an all-white world. 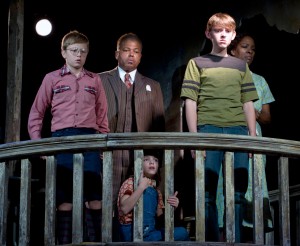 It is worth noting that despite the young audience that this production is intended for, no punches are pulled here, particularly in the portrayal of the ugly personification of the community’s racist ethos, Bob Ewell, fearlessly and effectively played by Larry Neumann Jr. with a chilling realism. When he rolls off the “n” word as routinely as whites would in the day, and especially the climactic scene where he spits in Atticus’ face, the tension and hatred are so palpable that the audience literally gasps. In an odd way, that reaction is a hopeful sign of just how far we have come on race relations.

Children tend to see through unjust community conventions more clearly than adults often do and Atticus’ lesson to his own children that you cannot know people until you have tried walking a mile in their shoes comes across more clearly, if disturbingly, to the young, judging how engaged children appeared to be at the performance I caught. There are post-show discussions after every performance, and the insights from kids about what they had witnessed after the performance that I caught were revelatory.

The small size of the space, the shortness of the run and the popularity of the property has meant that there has been a surprise run on the few available non-school public performances, which take place Friday and Saturday evenings and Saturday and Sunday afternoons. Because those sold out, an extension of additional weeknight performances have been added after the originally announced run, though those have reportedly sold out as well. Though officially sold out, however, the Friday night performance that I attended had loads of empty seats—whole sections, in fact—reportedly due to blocks of tickets bought by corporate sponsors who then cancelled at the last minute.

Standby numbers, Steppenwolf says, are issued to would-be ticket buyers an hour before each performance and any turnback tickets are then resold while they last by number order, which suggests that the diligent still have an excellent chance of catching this powerful show. (Dennis Polkow)