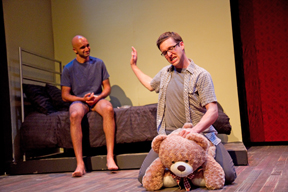 It can get dangerously tedious, a play about a playwright and his novelist friend talking about the art and craft of writing throughout an entire play. But Itamar Moses’ critical darling “The Four of Us” not only edges past that basic premise to explore the longstanding mutual envy between the friends, but also, with a daring metatheatrical twist, manages to upend your every preconceived notion about the act of writing and acts of bitter friendship. “Frenemies” since they met ten years before at a young musicians’ summer camp, David nevertheless becomes the more jealous when Benjamin lands a book deal, while he struggles with unfortunate Midwestern productions of his plays, even though he’s always been more successful with women than David. Moses mischaracterizes the Midwest, as this is a sharp, brisk and funny Chicago premiere, featuring Usman Ally and Collin Geraghty in impressive turns as David and Benjamin respectively. I could have done without the Nickelback music cue; in general, the play has a slight but unnecessary reliance on current pop culture. But Theater Wit’s production of this incisively witty play is not to be missed. (Neal Ryan Shaw)