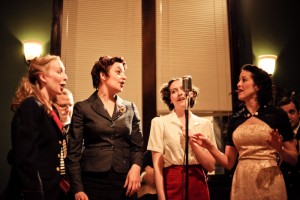 Strange Tree Group make every creative effort to recreate the experience of living in constant fear of air raids during the London Blitz of 1940. A pre-show cabaret performance that leads you into the proper performance space amidst wailing sirens and hastily shuffling feet paves the way for an entertaining evening of short plays set during World War II.  In the first, an American girl and English boy have an adorably awkward meet-cute in a London Underground tunnel during an air raid. In the second, an American soldier and his girl have one last dance before he has to ship off. In the last, a wounded veteran is forced to confront the love he shares with the fiancée of his dead soldier brother. They’re getting at themes of love, loss and war, but the glue that holds the show together—the air-raid framing device—is more confusing and misleading than anything, especially with only one English accent popping up the entire time.  (Neal Ryan Shaw)