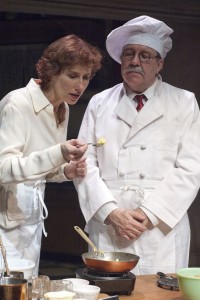 It’s no small challenge to play an iconic celebrity of the likes of Julia Child, especially when a recent film portrayal featured Meryl Streep in Oscars-nom-worthy form. Karen Janes Woditsch is so absolutely perfect in the role at TimeLine, capturing not only the singular vocal style, but also the peculiar mix of bookish intelligence and gee-whiz awkwardness that made up so much of Child’s charm, that we left the theater discussing the possibility that she is actually a better Julia Child than Streep.

Another challenge when you’re dealing with the story of television’s first food celebrity’s discovery of the sumptuousness of French cuisine, and her journey from novice to master, is communicating food’s sensuality. Certain movies, like “Big Night,” have done it, but limited space, time and budgets can lead theaters to shortcuts that exile food out of the senses and into the imagination, like the production of “Po Boy Tango” at Northlight in 2009 that used pantomimed cooking and eating in a distracting manner. No such disappointments here, as the use of smells as a staging device come to the fore in the very first scene, when the succulent odor of shallots cooking in butter punish the theater-goer who’s failed to feast beforehand or, at the very least, made a post-theater reservation at a bistro. This even becomes a certain kind of high-risk theater when, Terry Hamilton, playing Chef Max Bugnard, teaches Child and her classmates how to make perfect oeufs brouilés (scrambled eggs), by actually doing so on stage. Call it theater of the delicious.

The play, a world premiere by William Brown and Doug Frew, smartly understands the inherent dramatic arc of the source material: the rise of Julia set against the McCarthy-era career disappointments of her loving and beloved Paul Child (ably played by Craig Spidle who, like his character, lives in the large shadow of his partner) and manages to convey the pathos, the passion and the comedy. Since the play takes place mostly in France, but so many of the characters reside in the States, the playwrights have smartly brought letter writers to life (in uniformly solid performances) rather than just having Julia and Paul read them; this adds to the sense of “life is a rich cassoulet” that permeates this highly recommended show. (Brian Hieggelke)