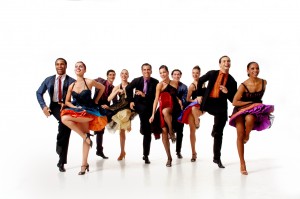 Eduardo Vilaro once told me that, as a Cuban-born American whose parents immigrated to New York when he was very young and who had spent most of his adult life in Chicago, he never developed a sense of home. As a young dancer in New York, Vilaro performed with the iconic Ballet Hispanico; in Chicago he founded his own company, Luna Negra Dance Theater—building a home in a new city. In 2010, after fourteen years in Chicago, Vilaro returned to New York as artistic director of Ballet Hispanico, experiencing a sort of homecoming of the itinerant. I talked to him about Ballet Hispanico’s upcoming performance at the Harris and the transition back to a new New York via phone.

“It’s certainly changed a lot in the fourteen years I’ve been away. It’s interesting to see how the mayors have worked to take back the public spaces. There’s a lot of Chicago in New York now. On 34th Street, a little kiosk where you can buy sandwiches and sit down… I mean, for me, growing up in the eighties…really? No.”

How does it feel to be back at Ballet Hispanico?

It’s been fun introducing my aesthetic to the company while developing what they already had. Tina [Ramirez, founder of Ballet Hispanico] had a big musical theater background and did flamenco, which is very nightclubby. Like her I like strong movers, but her approach was much more presentational: big and bold and musical theaterish.

I notice there aren’t any of your pieces on this program.

No. I’m exhausted. It is really exhausting to immerse a whole organization first in your aesthetic and then in your vision. I had no time to do a piece now, because I had to do other work to set the vision going. I’m planning to make a work here to open in the fall of 2011.

Annabelle Lopez Ochoa has a piece called ‘Mad’moiselle’ about the whole icon of Maria in Latin America. She’s very playful, very dark, some very powerful subtle moments; you really get the whole machoism in the problem, the problem how women are treated as virginal goddesses and also Mary Magdalenish. It’s so brilliant; she’s really amazing. And we’re in our fortieth anniversary, so I’m bringing in new work and masterworks. In honor of the Mexican centennial and bicentennial I brought back a work called ‘Tres Cantos,’ about the strength of the indigenous Mexican people in that time.

What has been most challenging about returning to Ballet Hispanico?

The challenge is that going to a bigger institution, it’s more institutionalized. You lose a lot of flexibility. We’re doing amazing work, but I’m accustomed to being flexible. One thing is that, because New York has such real estate, I started an Instituto Coreográfíco and employed two Chicago choreographers. Now I can be the platform and set the bar for more Latino leaders who want to do culture-specific work, so that’s really the exciting thing, building that because you can. (Sharon Hoyer)