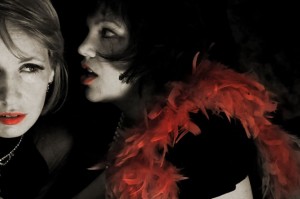 The three women at the center of this new work from French writer Pierre Notte (in translation by David Bradby) are in a bad, bad way. Listless, tortured, haunted, desperate for an escape from the confines of their tiny apartment and tinier lives…what’s a girl to do? Manic, overbearing Mother (Beata Pilch) cooks and cleans with ferocity; nervous, raven-haired Marie (Sadie Rogers) retreats to her makeshift cabaret in the cellar for some sultry singing and self-mutilation; and the moping, languid Genevieve (Holly Thomas)? Why, she swipes her blonde hair out of her eyes, strikes a pose, and declares “I am Catherine Deneuve.”

There is much to admire in this darkly funny, bizarre and often touching ninety-minute play, directed by Valery Warnotte—but it’s the performances of Trap Door’s ensemble that make this “Deneuve” a must-see. The cohesive stylization keeps the audience hanging on even as Notte’s chaotic world spirals out of control, and both Thomas and Pilch are masterful in their eccentricity. But it’s the surprising and captivating performance from new company member Rogers as Marie—with her wide-eyed anguish and sad, sultry solos—who imbues this absurd world with palpable heartache and humanity. Also starring John Kahara as The Brother, with Gary Damico playing live piano. (Valerie Jean Johnson)