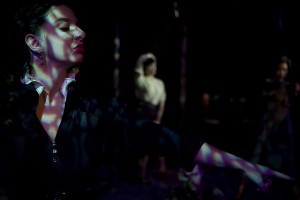 Half of the challenge of creating is protecting your creation from those who would steal it. Basing his tale on the story of Texans Henry “Dad” and Charles H. Garrett, who received a patent for an electrolytic carburetor in 1935, David Mamet dissects corruption while championing honor in this 1977 effort.

Charles Lang (Cody Proctor) builds an engine which uses water for fuel, then must protect it from thieves. Staged as a radio play, the audience is reminded of the meta conceit by artful folio work. It’s cool to watch and even cooler to listen to.

Brian Golden’s direction makes the imagined palpable; his actors are skilled vocally and physically. Proctor captures the put-upon genius searching for scientific certainty in the business world; George Zerante and Travis Williams are suitably oily as predatory lawyers. But the evening’s standout is Lindsey Pearlman; her timing and flexibility are a delight. (Lisa Buscani)