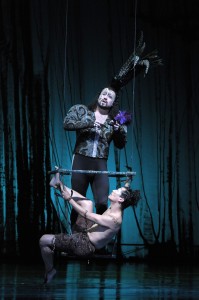 For those who musically associate Shakespeare’s “A Midsummer Night’s Dream” with the mirthful music of Mendelssohn, Benjamin Britten’s modern operatic setting of the Bard’s comic masterpiece will come as something of a culture shock.

Written for the 1960 opening of an expanded Jubilee Hall at Britten’s Aldeburgh Festival, the composer’s decision to write an opera for that reopening was made so late in the process that a ready-made libretto was needed. Britten and his longtime companion, the tenor Peter Pears, set about taking the Bard’s original text and streamlining it to its essentials, ultimately cutting the play’s prose in half and cobbling the remainder into a libretto that unlike, say, Verdi’s operatic Shakespeare adaptations which also needed to be translated into Italian, form a marriage of language and music that brilliantly preserves the character of the original. Here actual lines and soliloquies are recognizable not merely for exposing plot details—in many ways, the least essential element of the original play in any case—but for their sheer linguistic beauty with the added dimension of their being sung, or in the case of Puck, recited to notated rhythms against the score.

It needs to be said that Britten wrote the work for a venue that is literally less than a tenth the size of the Civic Opera House and for forces—including countertenor, boy sopranos and chamber orchestra—that are eerily tranquil and ethereal. This creates a huge vacuum for Lyric’s production, literally, in that the work’s delicate textures can be underwhelmed in such a vast space, although Lyric is addressing these challenges in some creative ways. Aside from hiring the reigning superstar countertenor of our day, David Daniels, to play Oberon, and have him suspended up in the air for much of his performance which has the effect of projecting him better, the members of the west-suburban children’s chorus Anima that play the faeries are discretely amplified. In Britain, boy sopranos are abundant given that there are specially trained choruses that sing regularly in Anglican church services, but no such tradition exists in America, and as such, the faeries are co-ed here, giving the choral sound less than the other-world effect that the composer so carefully specified. 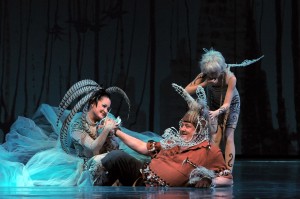 Britten takes “A Midsummer Night’s Dream” far more seriously than Shakespeare did, and Australian director Neil Armfield attempts to contrast that with a degree of nostalgic camp by having the lovers be contemporaries of the era that the opera premiered in, i.e., the JFK Camelot era, appearing in bad tourist garb of the day and featuring formal wedding garb in a virtual reconstruction of the First Couple’s attire for the inaugural balls. (Actually, when the opera premiered in June of 1960, the presidential conventions had not even been held yet, but I digress.)

On opening night at least, things were still falling into place, and between how soft the aural component was, how bare the stage and how static the staging (the principal movement of the production is a large, overhead aqua canopy that wavers according to the dream states of the characters), a somnambulist quality to the proceedings meant audience snoring and heavy breathing at times added an unintended dreamlike ambient authenticity. Act III, however, is the real charmer in this production, and the rhythm and comic timing pick up considerably and the strong cast is mercifully not upstaged by the kids and, yes, even a dog onstage. (Dennis Polkow)