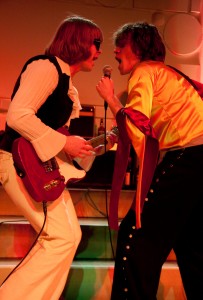 Signal Ensemble’s hit “Aftermath,” remounted in their brand new space, is an engaging musical portrait of a seminal period in the life and eventual death of the increasingly obscure Rolling Stones co-founder Brian Jones. Signal brings high spirits to their production and a fantastic attention to detail, found in the “backstage” laminates used as tickets/programs, to the carefully restaged album covers and posters adorning the walls. The songs, too, are staged with a studied authenticity, if not outright mimicry, that won’t disappoint. Though Ronan Marra’s script seems inclined to filter the thing through Jones’ perspective, with Mick and Keith and fellow bandmates portrayed in unflattering light, the sad truth of Jones’ life, and this production, is that Jagger and Richards were (and are) the stars, no matter how harsh the lighting got. For this ninety minutes, though, especially as personified by Aaron Snook, Brian’s light shines almost as bright, though Nick Vidal’s Mick brings just the right kind of swagger to make us understand Jagger’s devilish ability to make the girls and the boys swoon. (Brian Hieggelke)