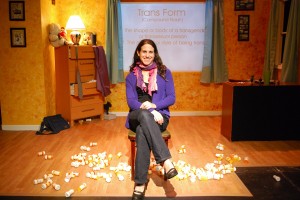 A friend who made the decision to transition from male to female said his doctor told him that no one would want him to transition. He was right; I didn’t. I was afraid of what it would mean for him and his family. In “Trans Form, ” Rebecca Kling chooses to face those same fears on her journey from manhood to womanhood, determined to become who she knows she already is.

Shows like Jane Anderson’s 2001 “Looking for Normal” have already covered the downsides of transitioning: the depression, the safety threats, the strained relationships with family and friends. Kling’s piece is occasionally awash in statistics and unrealistic expectations of clueless straight folks. But when she is specific about her unique experiences (her parents’ reactions, taming the dreaded DMV bureaucracy) Kling’s story becomes accessible and enjoyable. And the journey, as difficult as it may be, comes to its only possible ending. (Lisa Buscani)