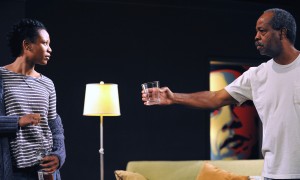 Each fall, Steppenwolf puts on three “developmental productions” of new work under the “First Look” rubric. Seeing all three in one day and evening, as is the custom for the press, makes for one of my favorite days of theater each year. Developmental for Steppenwolf means stage them in the Garage space, with a fairly minimal shared set framework; it does not mean skimp on world-class directors and actors.

In “The Etiquette of Vigilance,” playwright Robert O’Hara contemplates the life led by Travis, the 10-year-old boy who slept on the couch in Lorraine Hansberry’s classic “A Raisin in the Sun.” Now he’s an old man, with a grown daughter and a life spent believing in the dream, even as the realities of living in a violently segregated Chicago kept beating him down. Alfred H. Wilson plays Travis with just the right blend of sorrow, pride and sense of suppressed memories, his laugh breaking through the tragedy and conveying the way small moments of pleasure can make any life bearable. His burden is now manifest in his daughter, played dynamically by Alana Arenas, who he himself first burdened with the charge to continue the gradual upward progress of the family, now to college and beyond, but who eventually crashed into the reality of her need to find her own path. This stripped-down two-hander not only conveys the heartbreak of the dream deferred as well as the life deferred in the African-American experience, but touches on a more universal contemporary question: What’s  wrong with a generation that can’t fulfill the dreams of its parents, one that crashes into a ceiling above what had seemed like an unstoppable climb from one generation to the next. Though there’s some fuzziness around the play-within-a-play mechanics that drive questions of memory, perception and reality, “Etiquette” makes for a tight bit of topical theater. 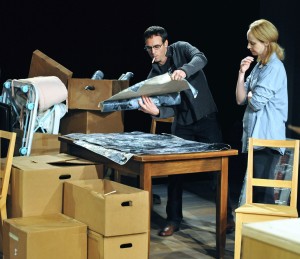 “The Old Masters” still needs a fair bit of work out of its playwright, Sam Marks. Clocking in at a slim sixty-five minutes, this tale of an artist-academic who champions his missing friend’s paintings all the way to art-world stardom, only to confront his own sense of failure in the process, plays with some neat ideas but suffers from a forced sense of exposition and a forced ending that doesn’t seem consistent with the play’s rising stakes. Casting might be some of the problem; with the exception of the exceptional Natasha Lowe (recently seen as Blanche in Writers’ Theatre’s “Streetcar”) in the role of the pregnant wife, Jay Whittaker and Anne Adams seem a bit hard-to-believe in their roles as artist and the missing artist’s girlfriend, respectively. Adams’ character is a cipher, more vacuous than intriguing, and Whittaker, though I found no fault with his acting, conveys a fastidiousness more like a critic or arts administrator. Room for development, I guess. 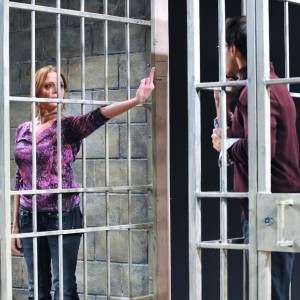 Playwright Jason Wells’ “The North Plan,” on the other hand, could be simply shifted a few doors north, with cast, script and director intact, and it would be one of the best things produced at Steppenwolf this year, in a year I’ve liked most everything on that stage. “The North Plan” is one of those rare plays that manages to combine a powerful message—it’s set in a dystopian near-future, when the full manifestation of the Homeland Security notion has come home to roost in an Orwellian fashion—with a raucous sense of humor and deft stagecraft that plays with conventional notions of farce and manages to make them as funny as the first time you’d ever seen such things. Credit director Kimberly Senior with making the physical limitations of the space no limit at all, and keeping things moving at just the requisite pace. The cast is a crackerjack band of crack-ups, especially Jennifer Engstrom as Tanya Shepke, who delivers the performance of a career as the fast-talking potty-mouthed white trash could-be-heroine. If I were an artistic director shopping for a play, I’d go all-in to pick this one up. As it is, I can only suggest that you see this production while you can. (Brian Hieggelke)