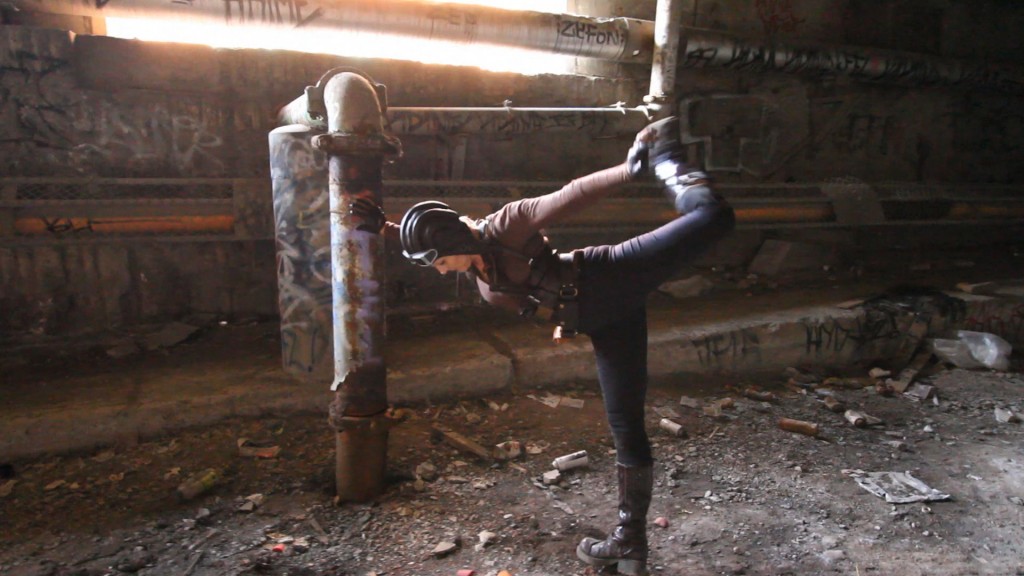 A punk-rock reading of Western architecture—the art form of patriarchy, from church to monument to bureaucratic stronghold—should by rights seek out fissures and flaws in the edifice: to construct a philosophy of demolition. And so it is with Atalee Judy’s “Course of Empire”—a year-long endeavor to view architecture through the lens of dance. Judy, the mind behind no-holds-barred Breakbone DanceCo, is more interested in the crumbling of empires than the erection of them; the word repeated most in our hour-long interview was “leveling”: physical, psychological, most importantly socio-political. Judy is a mosher, a punk rocker, a playful provocateur more likely to overturn the furniture in your house than sit in it.

“I’m not the kind of person who’s inspired when I walk into a pristine space. I’m relieved when I see a crack. I’m relieved when I see a dust ball. I’m uncomfortable in beautiful places—it’s not because I don’t feel like I’m worthy or that I’m intimidated.” Judy continued with a story from her youth. “When I was 10 my mom dragged me to Italy. I didn’t want to go, but once I was there I appreciated it. What I loved the most wasn’t the Vatican or Florence; it was this bizarre church of bones run by monks who had taken a vow of silence. The altar and the pews were made out of bones from the dead monks prior: many generations of monks decorating this church. It totally made me appreciate that creepiness and decay was architecture too.”

Decay is a poignant reality for us children of rust-belt towns—denizens left in the wake of an empire built and lost on industry: this generation’s American tragedy. For some of us, the ruins of the jazz age that now crumble in Detroit and Gary and Cleveland reveal a naked beauty and offer a comfort too honest to be found in polished and tuck-pointed relics. The fast-deteriorating public buildings in Gary are where Judy, a longtime urban explorer, eventually found her inspiration.

“My mom is an architect. So I first interviewed my mom, which ended up being kind of bust. I had to find this on my own ground. I had to ask myself what really inspires me in architecture. What I get off on is the deterioration of it: seeing ruins, seeing this once-beautiful façade decayed and cracked. So that started my emotional response and how I physically respond to architecture.”

The best physical responses to forgotten ruins include mischief, awe, appropriation and art-making: think raves in the Packard plant in the nineties, then paintings by Banksy in the new century that start debates about ownership and value. Clandestine, anti-commercial use of spaces originally designed to produce luxury for the upper classes and turn a profit. Architecture’s implication in class systems is at the center of Judy’s thesis. When I expressed interest—thinking quite conceptually—in the idea of architecture as intimidating and divisive, she brought the conversation back to brass-tacks reality. 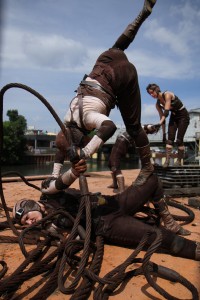 “Our working-class doesn’t have architectural interest or appreciation even. You go to higher-class houses and buildings and they have a lot of attention to the architectural element. I see the extra adornments as showing off. And what I do love is seeing that crumbling—you totally get that with Gary. The steel industry went out, they had white flight—their whole world just crumbled. They spent a million dollars on that church and got about eight years out of it before it went belly-up… it’s fascinating.”

Judy and videographer Carl Wiedemann documented crumbling buildings in Gary, Buffalo and his hometown of Rochester, New York. Wiedemann also created a short film of the four dancers involved with “Empire” breaking into graffiti-slathered subway tunnels and dancing, clad in leather helmets, goggles and combat boots, like a Terry Gilliam remake of “Footloose.” Unfortunately, the number of dancers is now down to three, as Suzanne Dado was forced to pull out of “Empire” at the last minute—a sudden deterioration on the project that forced Judy to adapt outside her comfort zone.

“If there’s one thing I’ve learned in the last two weeks, having to reconfigure a quartet into a trio is, with Sue pulling out for the best reasons in the world, I couldn’t fault anyone. Instead of crumbling and buckling and canceling the show, I had to step up and make connections with the trio that maybe weren’t there when we were a quartet because I was caught up in trying to make a grand statement. I don’t know how to look back on the artist I was. I’ve grown a lot, but I can’t say I’ve enjoyed it. I don’t think growth is about enjoyment, it’s about stepping up to those obstacles and twisting your brain around things you haven’t dealt with before.”