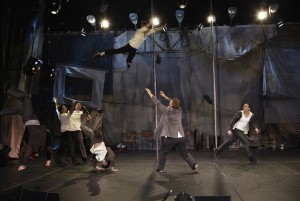 Imagine what would happen if you cross-fertilized the antics and acrobatics of “Cirque du Soleil” with the performer-delineated introspection of “A Chorus Line.”  The result is something akin to “Traces,” the inaugural production of the Broadway Playhouse, the former Drury Lane Water Tower Place purchased and renovated by Broadway in Chicago.

When the show is presenting physical feats—one at a time and usually concentrating on a single performer or subgroup—the skill involved is breathtaking and as jaw-dropping as any you are likely to encounter. The folks defy gravity with such reckless abandon and optimism that it is hard not to be caught up in what they are doing, particularly when they make standing horizontally along a pole look as easy as walking as if gravity were actually sustaining them.

When the show gets back down to earth, so to speak, interest wanes considerably. Just because someone can do miraculously engaging somersaults doesn’t necessarily mean that it is interesting to hear generic recitations of seemingly personal but actually vacuous resume-related information such as weight, height and age and see childhood photos of them flash across the screen. The concept is a good one, but the two tracks are thus far too far apart for this to work as an overall organic entertainment experience.  (Dennis Polkow)