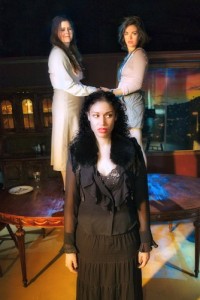 It seems like an honest enough, if odd, arrangement at first: a lonely rich woman invites two complete strangers into her home for dinner to help her commemorate the anniversary of her parents’ deaths, in exchange for a sum of money. Mayannah’s ornately furnished dining room in a near-future war-torn Los Angeles displays no shortage of Catholic iconography, with more than one crucifix. But the protein of choice at the table isn’t the body of Christ; instead they feast on the tiger believed to have killer Mayannah’s parents. With Ani and Rosemary (who is prone to blackouts and multiple personalities), Mayannah seeks a transcendental experience that will somehow reunite her with her long-lost parents. The women dance and tell stories, but it’s the despair at lives not lived and people not met that pervades this drama. The trio of actors pull at least that much off, and the production never lets you decide whether Rosemary’s transformations are psychological defect or magical realism. The play takes its time settling you into a surreal, horrifying, spiritual place. (Neal Ryan Shaw)