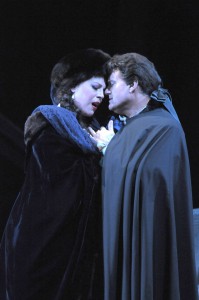 It is unclear why Lyric Opera is suddenly marketing this Verdi opera under the translation title “A Masked Ball” rather than the Italian title “Un ballo in maschera” that it is known by internationally, even when it has been presented in other languages (the Met premiered it in German!). So do we start calling “La traviata” “The Fallen Woman,” “Il trovatore” “The Troubadour” and should we start adding an “h” to Verdi’s “Otello?”

To further complicate matters, Verdi had to set “ballo” in seventeenth-century Boston, believe it or not (translation, “once upon a time” or “in a galaxy far, far away” as far as nineteenth-century Italian audiences were concerned), so that a European monarch would not be assassinated onstage. Instead, Riccardo, the philandering “Duke of Boston” gets his own, and Italian censors were okay with that.

“Ballo” is vintage Verdi in his middle-period glory; legendary tenor Luciano Pavarotti considered this his favorite role—it was the last staged opera he sang at Lyric—and indeed, it is the perfect “tenor” opera, although finding the perfect tenor to sing it is another matter altogether.

Happily, Frank Lopardo foots the bill surprisingly well, having not only the vocal chops but the dramatic range to add some welcome depth to the lead character. Riccardo is known in this version as Gustavo, attempting to restore Verdi’s “intention” of making the character the assassinated eighteenth-century King of Sweden Gustavus III that the libretto was loosely based on; even the court here is eighteenth century, complete with characters in powdered wigs for the final party scene.

Still, the real star of this production is soprano Sondra Radvanovsky, the reigning Verdi soprano of the moment whose voice is large enough to fill the cavernous Civic Opera House. Yes, it would be great if she would scale back a touch during her Act II love duet with Lopardo, who even singing full out cannot match her, but then, this is one of the foibles of having a stage director who was not only a singer (Renata Scotto), but a well-known soprano who actually sang this role. Here, it is the soprano, not the tenor, who stops the show in her Act III pleading to see her son a final time before her husband plans to murder her for perceived unfaithfulness. 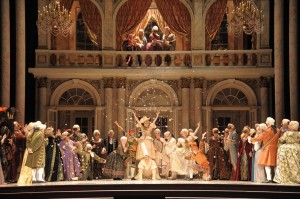 That jealous husband is played by Mark Delavan, though rather one-dimensionally and vocally pushing himself opening night, the timbre not the lyric beauty ideal for this role. Mezzo-soprano Stephanie Blythe in her Lyric debut makes a stirring impression (literally, the production having borrowed the cauldron effect from Barbara Gaines’ “Macbeth”) as the fortune teller witch that predicts the king’s impending doom and soprano Kathleen Kim adds sparkle, impetuosity and vocally flexibility as Oscar.

Donald Nally’s chorus sounds terrific and conductor Asher Fisch achieves the perfect balance between the brisk and light party-like tempos of much of the music along with the needed touches of melodrama and pathos, particularly in his handling of the elevating “forgiveness” music of the king’s death scene. (Dennis Polkow)