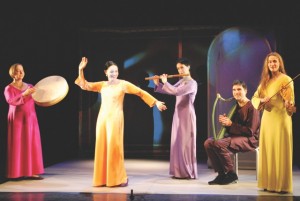 Taiko drummers, steppers, drill teams, hoofers and a French medieval vocal ensemble tag team testing the joists in the Harris floor Thanksgiving weekend in four performances by nine-plus local and international companies that love banging out a beat. At least twice a year CHRP director Lane Alexander recruits companies from around the world to perform alongside multicultural American rhythmic ensembles like the Miyumi Project, Step Afrika! and Be the Groove. The Chicago premiere at this Global Rhythms is the aforementioned French ensemble Diabolus in Musica, performing thirteenth-century trouveres written by women. If you’ve been to a CHRP performance, you know that the organization has done more than put on a plethora of foot-stomping shows over the decades, it has nurtured generations of dancers and built a massive, vocally appreciative family of percussive artists. With groups like the South Shore Drill Team performing, whoops, shout-outs and good vibes are sure to fill the air. Anyone who has ever been unable to resist bobbing their head or tapping their feet to a tune should see this show. With 50 percent of ticket proceeds benefiting more than fifty Chicago non-profits, you might want to catch more than one. (Sharon Hoyer)