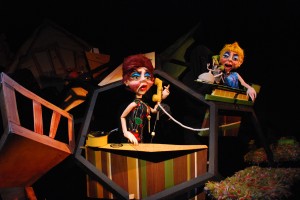 It’s not really a nostalgic childhood memory unless it’s summer, is it? Cynthia VonOrthal’s new full-length puppet show places us in the summer of 1971, when children still played in the street and you put new clothes on layaway at Sears just long enough before they go out of fashion. The Martini and Blahute families have been friends as long as they’ve lived next to each other, but this rose-colored slice-of-life becomes threatened when rumors begin to spread that Harm Martini has been fooling around on Gay. Aside from that, not much actually happens, and the threadbare plot moves along mostly due to the captivating puppet work. The puppeteers really disappear behind their puppets, which end up displaying a disarming humanity. The stage and script often get cluttered with too much business, and the play is a little too preoccupied with establishing the culture of the era with little payoff. It’s just a mismatch of a well-trod story and ingenious stagecraft. (Neal Ryan Shaw)

Nothing much happens??? The Vietnam war, new sexual mores, integration? If you lived through the 60’s and 70’s like I did, you know what all this meant. It was culture shock, it was life-changing, it was upheaval. The writing’s subtlety is what is charming and the pop culturisms are just plain fun.
The puppets are stunning, the sets are clever, the music is fun (and nostalgic if you heard it the first time around) and the direction moves things along.
And all with a cast of over 20 puppets! I thought it was great…see for yourself.

Run, don’t walk to see Cynthia Von Orthal’s original Chicago North-sider love story, “Berwyn Av.” at the Raven Theater West Stage (Thur- Sun). The script, inspired direction, beautifully realized puppets, ensemble of talented actors, clever set, and stirring sound/music delight the senses and inspire the soul. The leading character, Gay Martini, can take your breath way. If you are between 45 and 65 and come from a family of 4 or more..or lived near a family of five or more…the story will resonate. Attention Jeff Committee…this ensemble piece deserves your recommendation! Bravo to all!