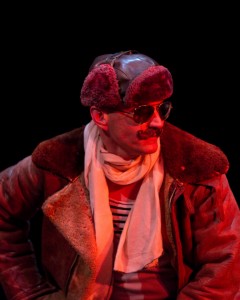 An ambitious and charming, if not always rewarding, interwoven operetta that stages Lewis Carroll’s (nee Charles Dodgson) nonsensical poem “The Hunting of the Snark” with a more tired rehashing of the dodgy sexuality of its author and his relationship with young girls—less interesting than the choice to present Dodgson and Carroll as separate characters, one timid and one flamboyant, vying for control. One would expect no less than the accomplished, often acapella, singing and impressively tight choreography that Caffeine and Chicago Opera Vanguard bring in collaboration. And the imaginative embodying of the characters in the snark hunt, including an anarchist bootblack, Marxist billiard marker and a delightfully slimy Barrister, are imaginatively and gloriously campy in a post-Tim Burton way—and they defy the big question of how to stage a poem so deeply about language itself with witty songs and eccentric whimsical acting. But the inclusion of Carroll/Dodgson (complete with a young and then grown-up Alice) psychodrama is an iffier choice; far more time in the play feels devoted to an exploration of Dodgson’s nude photos of little girls and its somewhat forced connection to the fear of the boojum (a snark that makes you disappear, which at one point is called a “void”) and Alice growing up. Alice and Dodgson’s relationship in the second half sidelines the momentum of the snark-hunt adventure itself, adding a draining solemnity that makes it harder to laugh at some gorgeous burlesque numbers toward the end of the show. When Dodgson sings solemnly about “unholy thoughts beyond my control,” the show psychologizes him in a way that’s at odds with the smart nonsense of the rest of the play. That said, “Boojum” is admirable for its spare but striking stage scenes, creative technical theater, the energized skill of the cast and the play’s grand designs. (Monica Westin)