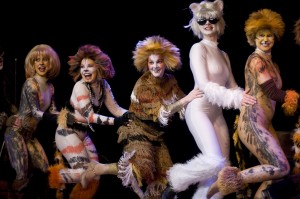 It is always fascinating to see how Theo Ubique will cleverly re-imagine even the most familiar shows on an intimate scale at the No Exit Café, the group’s Rogers Park venue. It worked wonderfully well with Andrew Lloyd Webber’s “Evita” a couple of seasons ago, so why not have a go at his most popular show—indeed, for better or worse, one of the most popular shows by anybody—“Cats?”

Doing such a theatrical warhorse is rather ballsy because the damn thing is so popular and overdone; the Broadway version is still touring and comes to town now and then, bringing new meaning to its advertising catchphrase, “Cats: Now and Forever” after nearly thirty years running.

Even so, on paper at least, such an overexposed work could conceivably benefit from a fresh, more intimate approach, and with talented local choreographer Brenda Didier branching out and making her directorial debut, the pieces looked like they could be in place for a refreshing new take.

When push comes to shove, however, what we get in Didier’s Theo Ubique version is a truncated version of the original staging and choreographic movements (though with key climactic ensemble moments often confusingly left on the cutting-room floor), rather than the fresh approach that Didier’s dual director/choreographer credit—which fails to acknowledge the source for most of her ideas—would suggest.

Didier does offer a new framing device of a small girl reading T.S. Eliot’s “Old Possum’s Book of Practical Cats,” the show’s source material, only to imagine herself a cat playing with other cats, and does manage to get in her own staging of “Macavity: The Mystery Cat.” But by and large, Gillian Lynne’s original dance moves have been appropriated and scaled back for a smaller space by performers much closer to the audience and each other, thus further emphasizing their miniaturization. It’s as if “Cats” were being done in a pound with oversize felines doing their thing within an invisible group cage.

This might have worked if the cats were all around the space the way the original staging was conceived and executed, cats literally crawling around the audience in every direction and interacting with audience members right through the evening. Those cats actually bonded with specific audience members and performed convincing cat mime, right down to cat stares.

Although the Theo Ubique cats look like approximations of the original performers with their skin-tight tights, wigs, tails and even the familiar makeup that was designed to be seen from much further away, because of how close they are to the audience, how boxed in their movements are and how non-differentiated and non-catlike the performances are, the experience feels like you are watching a group of uncomfortable artists imitating other performers pretending to be cats rather than attempting to be cats themselves.

As for the music, the tiny accompaniment is bogged down by the presence of drums distinctively behind the beat all evening, which further de-energizes the proceedings. The singing is serviceable though, in this format, even a mega-hit such as “Memory” becomes forgettable. (Dennis Polkow)