by Brian Hieggelke
November 22, 2010Filed under: 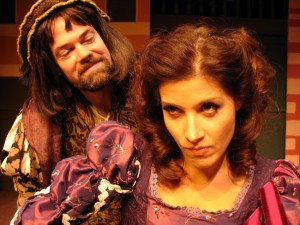 Cole Porter’s attempt to write a Rodgers and Hammerstein-style opus, his 1948 “Kiss Me, Kate, ” includes his most integrated score and most erudite lyrics. It came after a long silence and even after some flops at the end of Porter’s career, following a near-fatal horse riding accident that left Porter in constant pain for the rest of his life. Taken on because of tax problems, Porter pulled out all of the stops for “Kiss Me, Kate” and was able to succinctly sum up in a single work all that his art had developed into over decades as the top tunesmith of both Broadway and Hollywood.

Most productions tend to either concentrate on the work’s gut-busting comedy, as the most recent Broadway revival did to great success, or for the sumptuous score, as do the many productions mounted regularly by opera companies. Circle Theatre’s current production emphasizes the dance element, hardly a surprise given that the show’s artistic director Kevin Bellie is also the choreographer. And while that element is indeed well-served, if a dancer is going to say, carry the tune of a tear-it-up number such as “Too Darn Hot” for instance, you need to make sure that said performer can actually carry a tune or at least has received enough vocal coaching to be able to deliver the goods.

With the exception of the two standout female leads, who were both terrific, much of the cast was consistently having vocal issues, whether coming in under pitch, not having the range of a song, awkward seams between chest and head voices, et al. None of this was helped by the fact that the tiny pit ensemble was overhead and behind the cast, and the musical arrangements themselves were such that the performers had virtually no melodic support, a challenge for even accomplished singers. Since Circle has announced plans to mount “A Little Night Music” and “Brigadoon,” these issues really need to be addressed head-on to maximize the effectiveness of performing musicals that are melodic-based.  (Dennis Polkow)