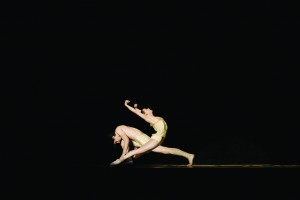 “Movement comes from individual people’s qualities. What are we picking out and reinforcing that one person did naturally?” Glenn Edgerton, artistic director of Hubbard Street, is talking about the process of staging repertory work—specifically Jiri Kylian’s sensuous, iconic “Petite Mort,” a personally resonant piece for Edgerton, who was a member of Nederlands Dans Theater when Kylian first choreographed it. “In 1991 it was very raw, even in technique. Over the years it has become more codified. It’s a very sought-after piece and every time it’s presented with a new company it becomes more exact. Now it has its own technique. It’s fun to analyze to the nth degree what our old colleagues did naturally…we were just young dancers doing what we do. And it’s great fun to realize it was an important time in Kylian’s development.”

Fun, too, is imagining the future evolution and codification of new work placed on Hubbard Street’s versatile dancers. It’s true that Hubbard Street’s reputation has gained the company rights to a whole lot of sought-after pieces—take for example Nacho Duato’s gorgeous and chilling “Arcangelo,” presented as part of an eclectic, near-flawless fall program back in early October—and to work with the most talented choreographers alive, be they classically inclined like Duato or postmodernists like the ingenious Victor Quijada. But among these must be listed Hubbard Street’s resident choreographer Alejandro Cerrudo. The fall program opened with Cerrudo’s entrancing, gemlike “Blanco,” a vision so perfectly realized and attentively performed that the Harris audience was enthralled from the first subtle gesture. Now, eight weeks later, Cerrudo will present the Chicago premiere of “Malditos,” a work he developed in partnership with Nederlands Dans Theater, splitting his time between Chicago and The Hague. “Malditos” had a U.S. premiere earlier this month at the Kennedy Center. One envisions companies worldwide clamoring to perform Cerrudo’s work, analyzing it with reverence in the decades to come.

The rest of the winter series promises to showcase Hubbard Street’s diverse capabilities with a performance by Hubbard Street 2 and the return of Ohad Naharin’s stormy “Tabula Rasa.” (Sharon Hoyer)