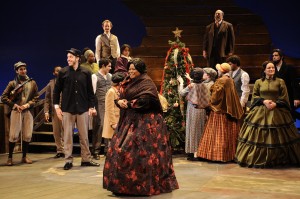 Borrowing the template from “Ragtime” of having well-known historical characters musically interact with fictional characters representative of various classes of American society, “A Civil War Christmas: An American Musical Celebration” attempts to use the holiday season as a nostalgic look back, warts and all, at our conflicted soul-searching as a nation at the climax of its greatest national crisis. The scenario for Paula Vogel’s play—receiving its Chicago premiere from Northlight Theatre—is Washington, D.C. on Christmas Eve, 1864, when General Sherman gave President Lincoln the captured city of Savannah, Georgia as a Christmas present.

The show cleverly uses the African-American experience on both sides of the conflict as a means to look at ourselves in the mirror with the clear adage that the more things change, the more they stay the same. The scene of an escaped slave and her daughter finally arriving at the bridge across the Potomac only to be turned back by Union soldiers because the city already has enough of “her kind” could come right out of today’s headlines.

There is much to admire in this epic and often uplifting production, but the show is unfortunately never allowed to realize its full potential and really soar its way into our hearts the way that the material itself suggests that it could. Much of the problem is how static and episodic things are, characters coming and going and offering their own narration before “acting out” brief scenarios though rarely able to credibly bridge that gap back and forth from storyteller to participant.

And then there’s the music, such as it is, in that there is no original score or songs here at all, but a pastiche of a verse here and a verse there of a Christmas carol followed by a spiritual followed by a folksong, again, the transpositions from drama to song being immensely jarring. Not helping matters is that the sparse musical accompaniment—though occasionally punctuated by a guitar strum, a banjo line or a violin which are used more as props than as integrated parts of the sonic fabric—is primarily New Age-style piano accompaniment. Just when a musical moment seems like it might start to go somewhere, such as for instance, when Felicia P. Fields poignantly starts into “What Child is This?” while she is contemplatively sewing, she is interrupted by a mediocre ensemble taking up the verse and we are emotionally stopped as cold in our tracks as those slaves on the wrong side of the Potomac. (Dennis Polkow)